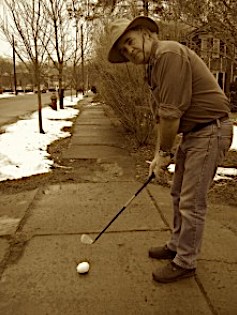 The cartoonist, Danny Shanahan, who contributed drawings to The New Yorker from September of 1988 through last year,  died early this morning, according to his wife, Janet Stetson. He was 64, just days shy of his 65th birthday. His death was due to complications from surgery.

Danny became known at first as a pun-centric cartoonist, but soon enough he was plowing the same cartoon fields as most everyone else, taking a unique detour into a number of Elvis Presley cartoons. He came into The New Yorker world wide-eyed and confident. The first time I met him, not long after his first New Yorker cartoon was published, he asked me how to get New Yorker covers (“You begin by submitting them,” was my helpful advice).

Danny’s star rose quickly at The New Yorker, becoming a favorite contributor during editor Robert Gottlieb’s short tenure. Mr. Gottlieb was so fond of Danny’s work, he once huddled with then art editor, Lee Lorenz to develop a cover idea for Danny to execute (the cover, a businessman running along a city street, with New York City Taxi rates on his briefcase, was published August 12, 1991). Over his thirty-two years at the magazine Danny contributed approximately a thousand cartoons, numerous illustrations, and a dozen covers.

Danny was born in Brooklyn, July 11, 1956, one of eleven children, and raised in Bethlehem, Connecticut. Before bursting onto the pages of The New Yorker, he tended bar at The Bottom Line in Manhattan’s Greenwich Village. He lived for a time in New Mexico with his family before moving to Rhinebeck, N.Y., where he became part of a small community of New Yorker cartoonists that included Michael Crawford, Liza Donnelly, and myself.

Around Rhinebeck, Danny was often seen strolling the town’s main street, sometimes with a cigar in his hand (until he quit in later years). In a number of his New Yorker cartoons showing small town sidewalk scenes, shop windows contain names of actual stores in Rhinebeck.

Decades ago he and I began meeting on a fairly regular basis in a Rhinebeck coffee shop, usually on a Thursday or Friday morning. Eventually our duo became a quartet with the addition of the New Yorker cover artist and cartoonist, John Cuneo, and Mark Burns, a local friend well versed in humor (he’s a writer). We came to know Danny as someone with an uncanny ability to fire off hilarious, often dark jibes, machine-gun style. During these coffee-soaked sessions Danny would invariably derail the conversation with a comical hand grenade. He would also tell stories that could go on for five or ten minutes, then another ten minutes after he had interjected, “Long story short.” But when he talked shop, he was always serious, proud of his New Yorker career; he wrote 99.999% of his cartoons (I only know of one drawing he did that came from someone else – a friend’s off-handed remark Danny recognized as cartoon material). His competitive side, if that’s what it was, was never far from the surface. He was one of the first of the magazine’s cartoonists I knew – if not the first – to talk about how well, or how poorly he was selling. Mostly, he sold well.

In the past five years, throughout a tragic series of personal events, his placid demeanor curiously remained intact, although he became more of a listener than a talker. In one of our last coffee shop meetings, pre-pandemic, I said to him, “I’m amazed by how well you seem to handle everything.” He looked directly at me (something he rarely did) and said, with a smile, “On the outside.”

In December of 2020, The New Yorker suspended his contract. His last drawing for the magazine appeared in the issue of November 23, 2020. In the drawing a pilgrim woman, holding a cooked turkey on a platter, says to another pilgrim woman: “He says my eagle tastes fishy, so this year I’m trying something new.”

Amidst personal turmoil, Danny moved to South Carolina to be with family members. Our friendship, lasting as long as his New Yorker career, was tossed up in the air. Just a few months ago, Danny and I finally exchanged letters. He wrote: “I’m looking forward…to start building back up…what I’ve caused to tumble down.” With the news today that Danny had passed away, there is sadness as well as ample confusion.

Danny leaves behind his wife, and two sons, Render and Finnegan.

–Photo at the top of this post: Danny Shanahan in Rhinebeck, NY., taken by Michael Maslin