I’m devoting today’s Spill to Rea Irvin’s long-running Talk of The Town masthead —  the one that appeared for 92 years, before being replaced this past May by a redrawn effort.   Tune out if you wish — at least I’m not talking about the two dots that sometime appear below certain cartoons.

I happened upon this passage about the Irvin masthead  (shown above) in Brendan Gill’s must-read memoir, Here At The New Yorker.  I haven’t read a better description. We pick up just after Gill has discussed Eustace Tilley:

“The drawing at the head of “Talk’ is in some ways ways more mysterious even than the cover and deserves examination.  The dandy is shown at the left-hand side of the drawing; he is in profile, wearing a high stock, with a monocle on on a ribbon screwed into his left eye. He is engaged in writing a missive of some length with a grotesquely exaggerated quill pen.  On the right-hand side of the drawing, full-face to the viewer, perches a plump black owl, roguishly winking.  Between the dandy and the owl rise some peculiar skyscrapers, topped by cupolas unlike any any to be seen in New York.  Rays of sunlight, or perhaps moonlight (for the owl’s unwinking eye is wide-open), stream from behind the skyscrapers.  Dandy, owl, and sky-scrapers are drawn along a single notched, curving line, under and over which float a number of wheels with sawtoothed  rims. What is this incoherent jumble? Nobody alive any longer remembers, and it doesn’t matter. There the heading is, and every week we see it and yet take care not to see it.; it is a mere reassuring blur at the top of the page as we settle down to our reading of Notes and Comment. As such, it remains a continuing witness to the almost total confusion  of purpose manifested in those early days by Ross…”

The new masthead — and I have to stress it is new — appears below.

As I wrote on the Spill back in May when this new masthead was installed (the redesign first appeared in the issue of May 22, 2017),  Mr. Irvin’s charmingly imperfect scroll-like line has met a white-out brush.  His owl has been re-drawn, his buildings re-drawn too (with the inclusion of One World Trade Center in this new assortment).  Tilley himself has changed just a bit.  The designery horizontal line running over the drawing (added in the issue of February 21, 2000) remains.

Let’s compare and contrast the Irvin masthead with this new one, which we’ll call the Niemann version (after Christoph Niemann, who was hired to redraw the masthead), incorporating some of what Mr. Gill spoke of.  The 92 year old masthead segments below will always appear on the left (you’ll be able to tell the difference because of the slight amber color of the older version); the Niemann redrawn masthead segments are to the right.

Brendan Gill: “The dandy is shown at the left hand side…he is engaged at writing a missive of some length”

The dandy remains in Niemann’s version, although he’s lost many of the character lines in his hair, on his jacket and even his face. The white dots on his lapel have disappeared. His body has narrowed as well.  Tilley’s new face is smoother — not yet approaching the cartoony Tilley look the magazine has incorporated on its various online features, as seen here: 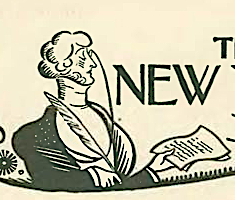 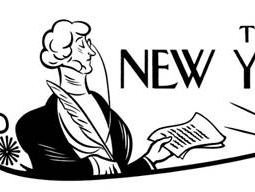 The Irvin owl as been replaced by a slimmed down version and losing some of the woodcut-esque lines around its face. It somewhat resembles a rubber stamp.

Brendan Gill: The “peculiar skyscrapers topped by cupolas unlike any to be seen in New York”:

The new skyscrapers (seen on the right) are no longer peculiar; they are now a generic skyline, identifiable as Manhattan’s only by the addition of the World Trade Center, which, if we’re going to get technical (and I wish we wouldn’t) would rise far above its neighboring buildings. The cupolas are gone, as is the spacing of the buildings. The new buildings are huddled together. The building to the far left in the new version looks somewhat like Pisa’s Leaning Tower, except it’s not leaning. Irvin’s buildings had breathing space — something city dwellers cherish. 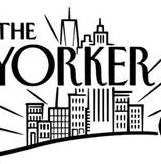 Brendan Gill: “Rays of sunlight, or perhaps moonlight…stream from behind the skyscrapers”

In the 92 year old version, each of Irvin’s rays can be seen as an actual drawn line, with imperfections, even a blob or two of ink just above the owl. In the new version (on the right) the beautiful symmetry of the streaming lines has been off-set by the disappearance of a line shown behind the owl’s head. The hand-drawn quality of the lines has disappeared, replaced by perfect spear-like lines, each one just like the other. 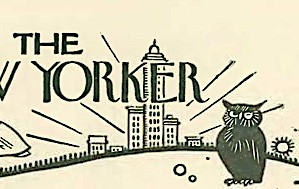 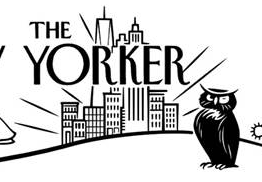 The curvy line has completely lost its notches. The bare line in the new version seems drawn by a chiseled felt tip marker. Its end on the right  just tapers off. Irvin’s 92 year old version ends with a mysterious irregular line, that runs thin to thick, ending with what looks like the bumper at the end of a subway line. It’s quite beautiful in its own peculiar way.

Brendan Gill: “…a number of wheels with sawtoothed rims”

The wheels remain, yet they have been re-drawn. (Irvin’s on the left, Niemann’s on the right). Note how Irvin’s scroll has lost its flair as well as a couple of tiny scratchy lines just to the left of Tilley’s elbow.

The cleaned up wheels, shown in the screen grab below right are puzzling.  In the Irvin drawing on the left, we see what look like the artist’s expressions of the moment — stray pen marks around the small circle floating off to the right.  I’m a fan of imperfection.

And there we have it. Irvin’s “reassuring blur” has been transformed into something far less blurry, featuring crisp lines, a defined skyline with at least one identifiable building in it, and an 86ing of character lines.  Rea Irvin created a masthead drawing with charm, mystery, and grace.  It’s a pity that it no longer “remains a continuing witness to the almost total confusion of purpose manifested in those early days by Ross…”