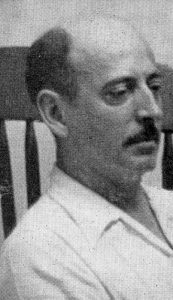 It’s more than fair to say no one drew like George Price. His work looks like a cartoon schematic.  And then there are those somewhat mysterious split lines. Looking at one of his original drawings up real close you can see that the splits were created by his drawing over and over (and over) his original pen stroke. He’d build up the line, and sometimes be off enough to create a parallel line. A fascinating style.

Surprising (to me anyway) that it’s taken til Part 32 of this series to get to Mr. Price as he is a New Yorker cartoon god. He contributed to the magazine for 62 years, becoming one of only 23 members of the K Club (his work was published over a thousand times in The New Yorker). The database shows the exact number to be 1, 279 (including his one cover, above right).

Here are just some of many ads by Mr. Price, all courtesy (as usual in this series) of SPX’s Warren Bernard.  All Mr. Bernard’s work — the researching, scanning, organizing, sharing — is greatly appreciated.