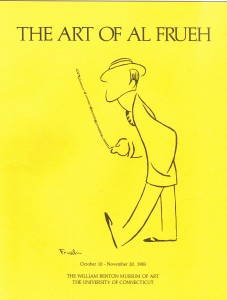 Once you’ve made your way past the famous Rea Irvin Eustace Tilley cover, and have turned the first page (with its heading, “Of All Things”) you run right into an Al Frueh drawing of a gent on a subway car, heeding the advice of a nearby sign to keep the subway cars clean. The passenger is seen putting great effort into cleaning one of the car’s windows.  Frueh not only had the first cartoon in the first New Yorker, he also had the first full page cartoon in the first issue (Wallace Morgan goes him one better later in the issue with the magazine’s first double page spread).

Frueh worked a decade-and-a-half at The New York World before settling into The New Yorker for the next thirty-seven years.  It’s more than fair to say he became at least as well known for his theatrical caricatures as for the roughly two hundred cartoons he contributed (and one cover,  for the magazine’s second issue, February 28, 1925).

Long ago, before I habitually dove into elderly copies of The New Yorker and became familiar with Frueh’s work,  I ran into this passage from James Thurber’s The Years with Ross:

…Frueh…once came upon me in my garage in Connecticut, sitting ten feet in front of my Ford and trying to draw it head on. ‘You can’t do that, Thurber,’ said Frueh, out of his vast knowledge and experience as a draughtsman. ‘You’d better draw it from the side.’ I took his advice.

The passage made an impression on me.  I draw cars nearly every day, and with Frueh’s words of wisdom in the back of my mind, I avoid the head-on drawing like the plague.

For more on Al Frueh:

The Complete New Yorker: the best place to see his work for the magazine.  It’s all there on disc: the theatrical caricatures, the cartoons, and his cover.

The Complete Cartoons of The New Yorker:  limited, of course, to his cartoons.

Obscure, but worth it if you can find it:  an excellent booklet “The Art of Al Frueh” (pictured at the head of this post) that accompanied an exhibit of his work at The University of Connecticut in the Fall of 1983.  It includes The New Yorker’s obituary (written by Brendan Gill) in its entirety, published September 28, 1968.

The New York Times obituary of September 18, 1968.  Along with The New Yorker’s obit you  get a decent idea of Frueh’s rural life on his 100 acre nut farm in Sharon, Connecticut.

Here At The New Yorker:  Brendan Gill’s memoir contains a self portrait of Frueh as well as affectionate memories.