Lately, while rummaging around through my own New Yorker history, I’ve spent a lot of time re-reading what other contributors had to say about the transitional period of Shawn to Gottlieb to Brown to Remnick. There were a number of books,  all published in the late 1990s, early 2000s: Renata Adler’s Gone, Lillian Ross’s Here But Not Here, Ved Mehta’s Remembering Mr. Shawn, John Seabrook’s Nobrow, E.J. Kahn’s Year Of Change. It was the E.J. Kahn book that got me looking over the rest of the Kahn books here at Spill headquarters.

I ended up going much further away from the late 1990s, back to The Harold Ross years, to 1949, when Who, Me? was published (it’s a collection of Mr, Kahn’s New Yorker pieces).  Either I knew who the cover artist was whenever I bought the book, and forgot — or I never knew.  Either way, it was a pleasant surprise seeing the signature “Darrow” way down at the bottom. At first, I wasn’t positive it was Whitney Darrow, Jr. , the New Yorker artist — the signature was very close, but not exactly as he signed his work at the time.

The inside flap confirmed it:

All very un-Darrow like. Here’s what Mr. Darrow’s New Yorker work looked like the year Who, Me? was published.  The drawing below appeared in the issue of July 2, 1949. 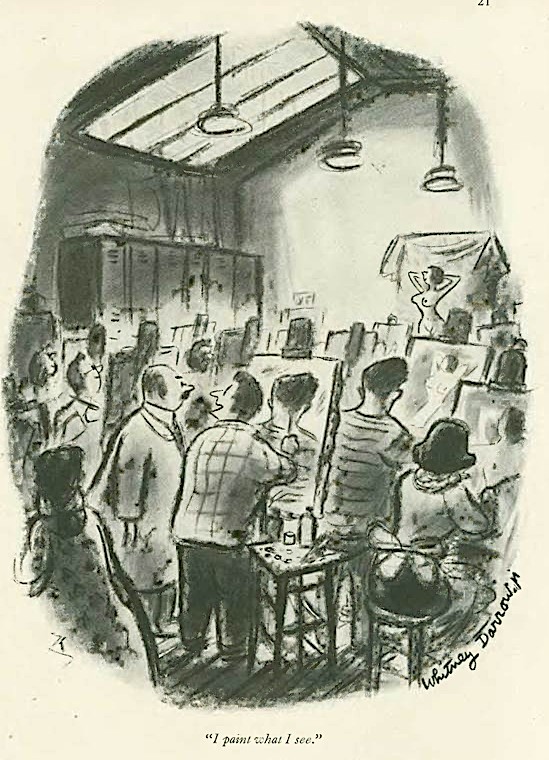 Whitney Darrow, Jr. (photo above) Born August 22, 1909, Princeton, NJ. Died August, 1999, Burlington, Vermont. New Yorker work: 1933 -1982. Quote (Darrow writing of himself in the third person): …in 1931 he moved to New York City, undecided between law school and doing cartoons as a profession. The fact that the [New Yorker’s] magazine offices were only a few blocks away decided him…” (Quote from catalogue, Meet the Artist, 1943)