What can I say: I love intersections (I even live at one). Not long ago I wrote about my leaving Manhattan to live on a dairy farm in a sleepy town on the edge of the Catskills. It turned out the town once was home of Dr. Fitz Foord’s sanitorium, used by a number of celebrated New Yorker folks in the middle of the 20th century – my hero James Thurber among them.

Another intersection, that of Thurber and John Updike, has long fascinated me. If you read enough by or about Updike you’ll eventually come to an understanding of how important Thurber’s drawings and writings were to Updike, well before his own work began to appear in The New Yorker.

A few weeks ago, while cruising around Youtube, I came upon a segment of a 1982 PBS documentary, “John Updike: The Man Who Made Rabbit Run.” In one snippet, Updike says, “I got into The New Yorker. I didn’t become James Thurber, but then nobody else could.”

Left: a screenshot from the PBS documentary”John Updike: The Man Who Made Rabbit Run.”

That comment whipped up a whole bunch of  Updike/Thurber connections I’d read about over the years, mostly in Updike’s own words.

We know from Updike’s memoir, as well as a piece titled “Lost Art,” published in The New Yorker’s first Cartoon Issue (December 15, 1997), how central cartoons were in his young life, and in his young adult life, as he made his way through Harvard. Although it was Mickey Mouse Updike cited as his first “artistic love and inspiration,” he soon became interested in the single panel cartoons he saw in Collier’s and The Saturday Evening Post. He became more than just a casual fan of the cartoons and cartoonists; in Self-Consciousness, he tells of impressing a soda jerk by being able to identify every cartoonist in an issue of Collier’s while looking at the issue upside down).(a)

Above: What an upside down Collier’s cartoon would’ve looked like to Updike – this one by Garrett Price in the issue of January 4, 1941.

When The New Yorker began regularly appearing in Updike’s childhood home via a gifted subscription, it was Thurber’s work that amped-up Updike’s interest. He asked for (and received) Thurber’s collection of drawings, Men, Women and Dogs for Christmas (originally published November 10, 1943, when Updike was eleven)(c). Updike cited The Thurber Carnival, out just two years after Men Women And Dogs, as one of the books that changed his life(e); he once listed Fables For Our Time (published in 1940) and My Life And Hard Times  (published in 1933) as among the books the made the greatest impression on him.

Updike had two close encounters with Thurber. Unfortunately, his one-and-only in-person meeting with Thurber does not seem to have been a high-lite in Updike’s life (b),  but the first encounter, not in-person, but via the mail, truly sparkles.

For those of us who treasure Thurber’s art, there is I would suggest, nothing  more wonderful than a Thurber drawn dog. In Updike’s Introduction to Lee Lorenz’s The World of William Steig, he tells us that in 1944, when he was 12 years old, he wrote Thurber a fan letter. Thurber responded with the drawing you see at the top of this post (Thurber obviously enjoyed this image as he did a similar drawing, published as a “spot” in the May 29th, 1943 issue of The New Yorker.* (See below left). 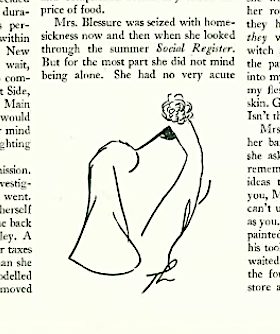 In his introduction for The World Of Steig Updike mentions his Thurber dog drawing as part of his “tiny collection” of cartoon art (the gallery includes a piece by Steig, several Steinberg drawings**, a New Yorker cover by Arthur Getz,*** and three Arnold Roth  watercolor paintings (the originals of the covers Roth painted for Updike’s Bech books) by. (f)

Updike’s Thurber dog is again mentioned in a piece he wrote for the January-February 1987 issue of Poets & Writers Magazine, calling his framed Thurber dog the “chief wall decoration” that hung in his office overlooking the Ipswich River in Ipswich, Massachusetts. (d) (Updike lived and worked in Ipswich from 1957 through 1973).

Left: The Thurber dog drawing hung in Updike’s office in the large building to the left of the bridge.

At various times and in various publications, or in speeches, Updike has described Thurber’s art. In a 2006 publication, Cartoon America: Comic Art In The Library of Congress Updike wrote: “Thurber’s drawing feels unstoppable, like the speech of a man who does not know a foreign language very well but compensates by speaking it very fast.” In a speech given at the Metropolitan Museum of Art in 1995, he called Thurber’s work “woozily drawn.”(e).

“Personal art” is such a great way of describing Thurber’s work. When newly acquired cartoon art (whether it is 80 years old or was just published last week) arrives here at the Spill, I feel somewhat of a buzz from it; having the original is a giant step closer to the artist. I’ve tried imagining the moment when 12 year old John Updike opened up his letter from Thurber to find the dog drawing –an electric moment when “personal art” created a link between them. As he told a reporter for the Houston Chronicle forty-one years later: “I adore Thurber. In fact, it’s not too much to say he was my hero.” (g)

My appreciation to James Plath, President of The John Updike Society, and to Miranda Updike for so generously sharing her father’s Thurber dog with us.

** The Steig drawing can be found in The World Of Steig, and in Due Considerations.

The 1982 PBS documentary, “John Updike: The Man Who Made Rabbit Run” seems to be currently unavailable for viewing, which is a shame. If anyone knows how to obtain a copy for personal use, please contact me.

Further Reading: If you want a large dose of Thurber’s dogs, there’re two books to think about:

The Dog Department, (Harper, 2001) edited by Michael Rosen, who edited the great A Mile And A Half Of Lines: The Art Of James Thurber.

Lastly, to wrap up this day’s particular intersection piece, there is the terrific Big New Yorker Book Of Dogs (Random House, 2012) which, as you see, features a fabulous Thurber dog on the cover (and back cover as well), a piece by John Updike within (“Deaths Of Distant Friends”), a piece about Thurber’s dogs by Adam Gopnik, dog drawings galore by a number of New Yorker cartoonists, including Thurber and Steinberg — and yes, my friends, even a cartoon by this cartoonist.