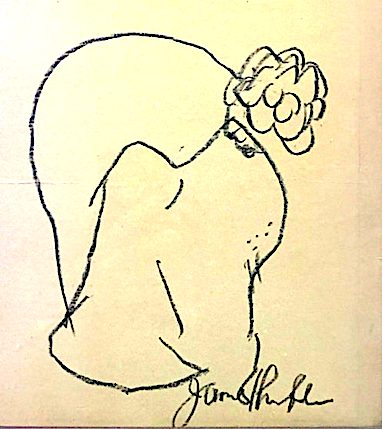 Last week we were thrilled to see John Updike’s Thurber dog drawing (shown to the left) courtesy of Miranda Updike. Today we learn that Thurber’s dog  traveled with Updike from his latter childhood home, in Plowville, Pennsylvania, to Harvard Yard (Updike went to Harvard from 1950 through 1954).

Here, courtesy of Michael Updike, is a letter John Updike wrote home from Harvard. “Plowvillians,” Michael Updike explained, “are his parents, grandparents and neighbors who read his letters.”

We can hope for a book of John Updike’s letters sometime in the not too distant future — one has been in the works since 2016.

In the next week or so we’ll take a look at some of the other drawings  John Updike had in his “tiny collection” of cartoon art.

— My thanks to Miranda Updike and Michael Updike for all!

The latest video in a series with The New Yorker‘s cartoon editor, Emma Allen (above, left) speaking with one of the magazine’s contributors.  This time it’s Maddie Dai, whose work began appearing in The New Yorker in 2016. Visit her website here.

A future Oval Office occupant (?) via Sophia Warren, who began contributing to The New Yorker in November of 2017. Visit her website here.