Book Of Interest: A User’s Guide To Democracy, Illustrated By Tom Toro

Today is publication day for A User’s Guide To Democracy, by Nick Capodice & Hannah McCarthy, with illustrations by New Yorker cartoonist Tom Toro (he began contributing to the magazine a decade ago). Ordering info and more on the book and its authors here on the publisher’s site.

Tom Toro (self portrait above courtesy of Mr. Toro) Born in Richmond, California on May 22, 1982. Graduated valedictorian from El Cerrito High School and matriculated to Yale. Edited cartoons for The Yale Herald and won a national championship in lightweight rowing in 2002, elected captain of the rowing team in 2004. Earned a degree cum laude in art history specializing in cinema studies. Attended NYU Film School for two years, shooting shorts and features that went to Sundance, Tribeca and Cannes. Began submitting cartoons to The New Yorker in 2007, first got published in 2010 – after the 610th try. Also a writer of literary fiction, short stories, screenplays and children’s picture books of the “unpublished” variety. [bio courtesy of Mr. Toro] New Yorker work: May 24, 2010 – . 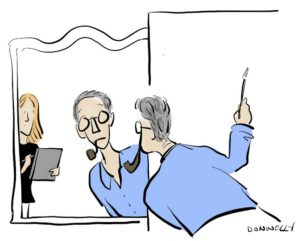 Join Ms. Donnelly at 5:00 as she brings her trademark live-drawing to Mr. Rockwell’s studio in Stockbridge, Mass. All the info here!

Just out of the Spill‘s range, but couldn’t help but note this September 4th newyorker.com piece by Laurie Gwen Shapiro, “The Improbable Journey Of Dorothy Parker’s Ashes” … (among other things I learned that Dorothy Parker co-wrote a song recorded by Bing Crosby in 1935, “I Wished On The Moon”).

Today’s Daily, having to say hi,  is by Jon Adams.

Mr. Adams began contributing to The New Yorker in 2017. Visit his website here.

Yesterday I wrote this about the upcoming New Yorker Festival (virtual this year, of course):

There’s a two page ad in this new issue for the upcoming New Yorker Festival. A link shown on the ad that will lead you to the schedule isn’t working as of this writing — I’ll let you know if there is anything cartoon-related in store.

So here’s my follow-up:

New Yorker subscribers received via email this morning a link to the full schedule. Sorry to report there does not seem to be a cartoon-related event this time round. An asterisk here about one Festival guest: Steve Martin is scheduled to appear with Jerry Seinfeld; Mr. Martin has a relationship with the cartoons through his collaborations with the cartoonists Harry Bliss, and Roz Chast. Come to think of it, Mr. Seinfeld has a New Yorker cartoon connection as well –and  a classic one at that: Season 9, episode 13 of Seinfeld: “The Cartoon”…the cartoon part of the episode written by the fab New Yorker cartoonist Bruce Eric Kaplan. One other New Yorker cartoon connection: Mr. Martin and Mr. Seinfeld will be interviewed at the Festival by The New Yorker‘s Susan Morrison. The current cartoon editor, Emma Allen started at The New Yorker (according to The New York Times)  working as “an assistant to the articles editor Susan Morrison.”