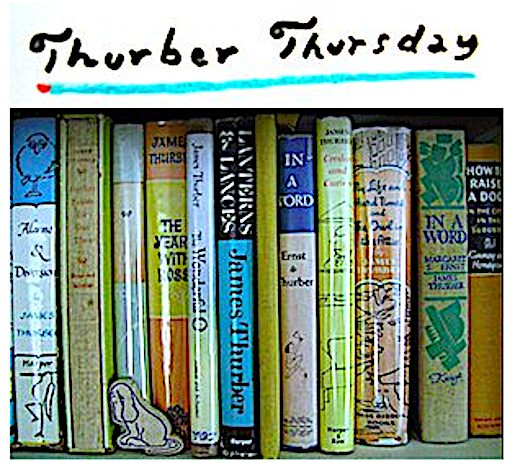 Maybe this sounds funny coming from someone who spends a lot of time drawing “pictures” but there are plenty of times I like to just take some time off to look at pictures… of New Yorker folks, past and present. Take last night for instance (please!)…oops, sorry, and apologies to Henny Youngman*…. Anyway, last night I typed in James Thurber on the Getty Images website and immediately came upon the 2 page file of Thurber photographs. Not so oddly, the collection also includes other folks named Thurber as well as — and this is odd — former President Obama, and some guys pushing over a car. But mostly there are photos of the Thurber of “Thurber Thursday.” In all these photos, Thurber, looks (to me) like he always looks: fascinating. I can’t show any of the photos here because they cost a fortune to license, but Getty offers them up to us to peruse for free online 24/7. So have fun.

After Thurber I decided to type in The New Yorker, and jeez, 100 pages of photos came up. I haven’t made it through all 100 pages, but just the half dozen I saw were loaded with really interesting images (some, as in the Thurber file, unrelated to the subject). One of Joe Mitchell I’d never seen before, several truckloads of New Yorker Festival posed shots, the Arnold Newman group photo of New Yorker cartoonists taken in 1997 for the very first New Yorker “Cartoon Issue” (a day I’ll not soon forget); there’s also an alternate photo of the group shot. There are New Yorker writers, editors, cartoonists (Steinberg, Steig)…it’s kind’ve like being at the biggest New Yorker party ever, and spotting the famous across the room, or seeing someone of note suddenly gliding by you. Thurber’s there of course, and his friend, E.B. White, as well as the magazine’s founder and first editor, Harold Ross. The current editor, David Remnick is there as well. Here’s a photo of him from 2000. I could keep listing names, but why not go to the party yourself.

*an earlier version of this post incorrectly identified Rodney Dangerfield as the author of the famous line. My thanks to Stephen Nadler of Attempted Bloggery for catching the error!