It’s a funny thing: in all these years of mentioning Thurber’s classic “What have you done with Dr. Millmoss?” as a life-changer when I was about 16 (most recently in last night’s Norman Rockwell live stream) I’ve always failed to mention that my first encounter with Thurber was several years earlier, when my 10th grade English class was instructed to open the issued anthology on our desks and turn to Thurber’s “The Catbird Seat” (originally published in The New Yorker,  November 14, 1942).  In the fuzziness of memory, I remember sitting in the classroom and opening up to the story. We were instructed to read the story to ourselves; the teacher stood up front of the class and watched us read.

I was immediately curious about the title — it bothered me. What the heck was a catbird’s seat, and what was a catbird. I don’t think I was aware yet of  “being in the catbird’s seat” as a common expression. I imagined a bird with cat’s ears sitting in a chair, and then I read the story. I didn’t care for it — it was way too complex for a brain used to devouring comic books. As an impatient 10th grader I would have rather been staring out the window (which is likely what I did). But here’s what I find interesting: of all the stories I read in school, from kindergarden through 12th grade, (with the exception of the Dick & Jane readers) “The Catbird Seat” is the only story I remember reading. It must’ve been the title that stuck.

Fast forward to today, when I looked up the story in The New Yorker, and looked through the issue. It seems like every time I go time-traveling I end up finding fun detours. The surprise in this issue was coming upon a Steinberg  Talk Of The Town spot drawing. I’d never seen it before (I don’t believe it’s included in Joel Stein’s Steinberg At The New Yorker — I couldn’t find it, which doesn’t mean it isn’t there. I miss stuff sometimes).

Steinberg’s debut (as a cartoonist) at the New Yorker was just a year before in the October 25th issue. One of these days I’ll go through those early issues to see what other Steinberg spots exist. 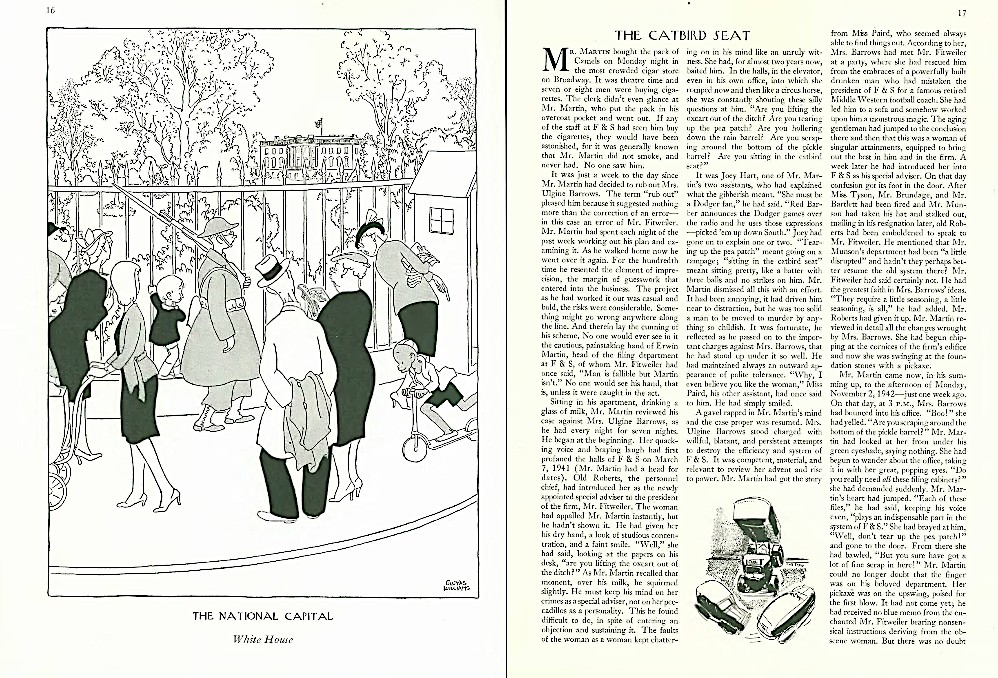 Adam Douglas Thompson on Trump and mail-in ballots. Mr. Thompson began contributing to The New Yorker in April of 2019.