Of all the Thurber books published in his lifetime it’s the cover of Let your Mind Alone! that I’ve always liked best. Notice I said the cover, and not the book (I like the book too, but it’s not my favorite).

The cover relies on a single Thurber drawing, “Motorman Concealing His Sex Life from a Woman Psychologist” (it appears, run vertically, in Chapter 9).

I’ve never thought too much about why the cover is so appealing (and I won’t now) — it’s just one of those things. A quick thought is that the cover drawing seems an odd choice considering the other choices within. Perhaps it’s the oddity that’s appealing.

According to Bowden’s James Thurber: A Bibliography , the first edition (published September of ’37) was  5000 copies. By year’s end there were six editions.

A few things about my copy: someone glued the dust jacket flap — just the flap — on the inside front cover of my copy. And: next to the fellow on the right, there’s a barely visible white line impression of the fellow walking off under the glued down flap. 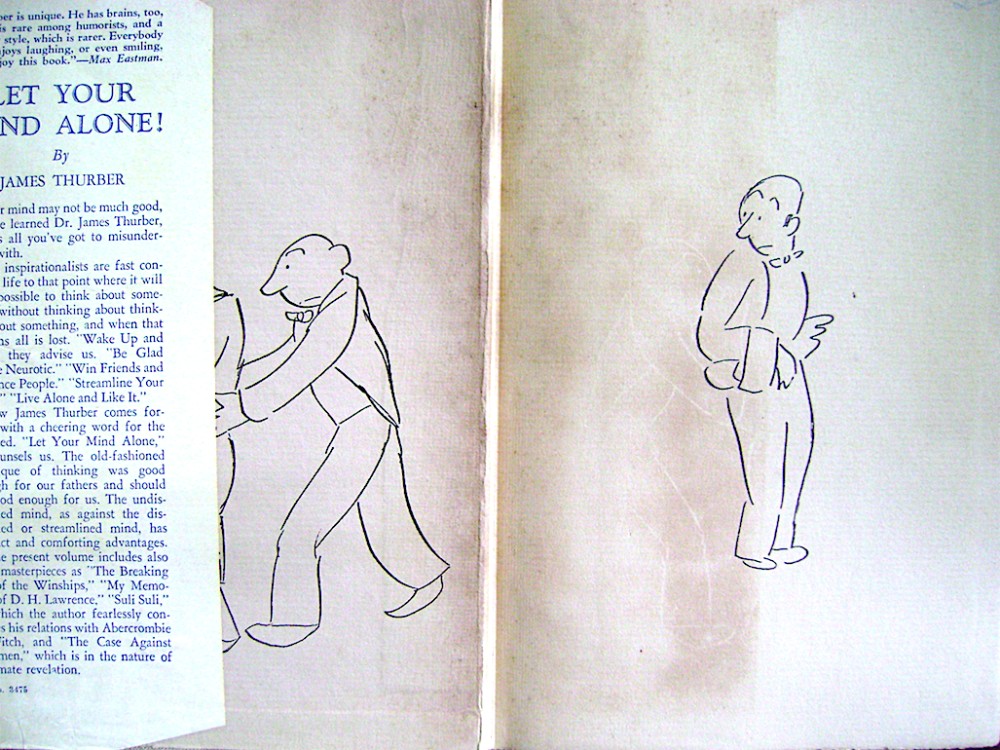 Funnily enough, even though the dust jacket cover is my fave, I do not have it (other than that glued inside flap mentioned above). My copy, a first edition, bought for $2.50 (‘as is”) decades ago, was coverless.

There are a number of later editions, with other covers, but for me, the first is the best (the Armed Services Edition is pretty great too).

Ms. Dai began contributing to The New Yorker in 2017.  Visit her website here.

From The Elective, June 11, 2020, “School Days Influences: Inside The World Of New Yorker Cartoonists”

Eight* New Yorker cartoonists and one** cover artist on their schooling.