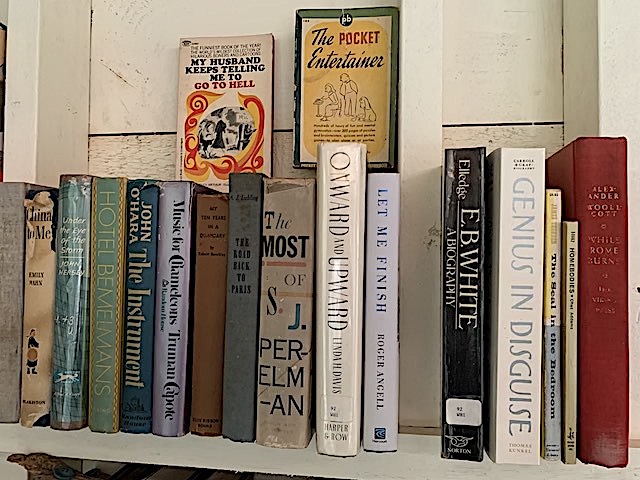 There’s a little bit of Thurber in this Thurber Thursday post, as one of his illustrations appears on The Pocket Entertainer book cover and one of his collections is mentioned later on, but the post really is about the small Summer New Yorker library I’ve put together over the years with yard sale finds and library book sales. Not pictured is the anchor volume of any New Yorker cartoon library, The New Yorker Album Of Drawings 1925-1975 (it’s too large for the shelf). The book to the far left, past Emily Hahn’s China To Me, is a very battered copy of Wolcott Gibb’s More In Sorrow (minus its dust jacket with Charles Addams art). Of the other titles, the ones most re-visited have been, and are, Capote’s Music For Chameleons, Linda Davis’s biography of Katharine White, Scott Elledge’s biography of E.B. White, Thomas Kunkel’s biography of Harold Ross, Addams’s Homebodies, and, of course Thurber’s Seal In The Bedroom and Other Predicaments.  Other titles have come in handy at times, especially the Perelman collection, and the Benchley with its Gluyas Williams illustrations. The oddity resting top left of the line of books, My Husband Keeps Telling Me To Go To Hell, was purchased for its Richard Taylor illustrations. A book of special note is Roger Angell’s Let Me Finish.  He celebrates his 100th birthday this week (link here to today’s newyorker.com piece by the magazine’s editor, David Remnick, on this milestone).

Tim Hamilton, on Trump and the mail.

Mr. Hamilton began contributing to The New Yorker in 2016. Visit his website here.