You can see all the work here.

As happens from time-to-time, the magazine has early released its next cover. Here’s Ana Juan’s cover for next week’s issue, as well as a short piece about it.

Arnold Zwicky’s Blog, which concerns itself with cartoon language, has posted a cartoon by a mystery cartoonist: 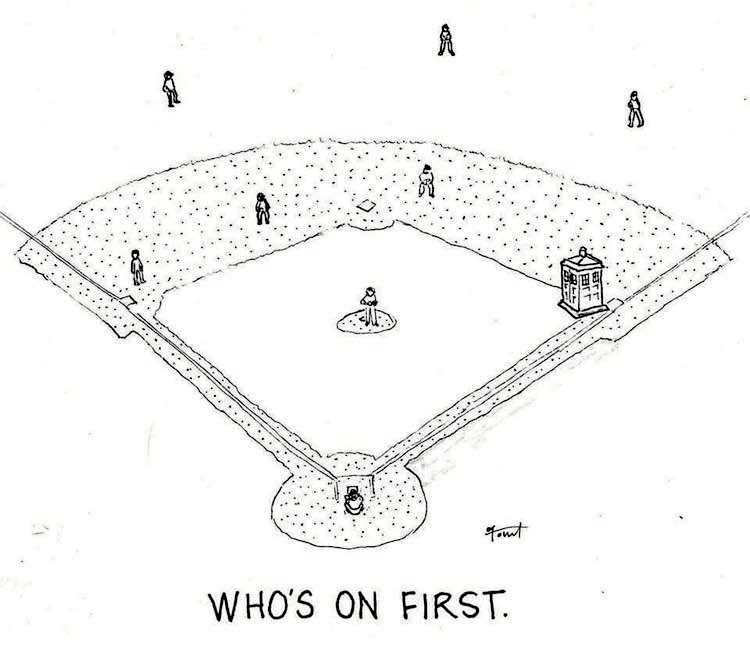 If you’re able to identify the artist, please contact Mr. Zwicky through his site.

This Sunday, at the Milford Readers & Writers Festival:

Mr. Weyant began contributing to The New Yorker in 1998.

Mr. Borchart began contributing to The New Yorker in 2007.

Mr. Eckstein began contributing to The New Yorker in 2007.

“Max” and “Simon” rate the the cartoons from the issue of October 1st.  P.C. Vey is awarded the CC‘s coveted “Top Toon” blue ribbon.  Read it all here.

Above: two pages of the Index from Volume 1 of The New Yorker Encyclopedia Of Cartoons

In his Foreword to The New Yorker Encyclopedia of Cartoons, the magazine’s editor, David Remnick has this to say about gender equality in the ranks of New Yorker cartoonists:

Any cartoon compilation that draws from these archives makes it clear what a male preserve it was.

And indeed, this encyclopedia reflects that in numbers of cartoons included by women. Of the advertised 3000 cartoons, 142 are by the 19 women represented. Simple math tells us that the remaining 2,858 cartoons are by men.  If you take Roz Chast’s 54 cartoons out of the 142, you’re left with 88 cartoons by 18 women. I emphasize again, as I did in the previous post about the encyclopedia, that this two volume set is not presented as an all-encompassing anthology representing the magazine’s past 93 years; there’s no expectation of some kind of balanced inclusion based on numbers of cartoons the artists contributed.  That isn’t what this encyclopedia is.

And yet, I did find myself hoping for more work by two major female contributors, Helen Hokinson and Barbara Shermund. They have a combined total of 6 cartoons in the encyclopedia. Ms. Shermund’s work appeared in The New Yorker just over 600 times (including 8 covers). I believe, if my numbers are correct she is the third most published female cartoonist in the magazine’s history. She is represented by 1 cartoon in the encyclopedia. Ms. Hokinson is in the top ten of the Spill‘s 23 member K Club (the group of cartoonists who have 1000 or more cartoons published in the New Yorker).  She is in fact, the most published female New Yorker artist in the magazine’s history with 1,796 cartoons and 68 covers. She is represented by 5 cartoons.