Note to Readers: Ink Spill was down nearly all of yesterday due to who knows what (that’s as technical as I get).  Sorry about that.

Here’s the Table of Contents:

Thirteen cartoonists, and fourteen cartoons (Warren Miller had two in the issue). Of the thirteen, you’ll notice two names still contributing fifty years later (50!): George Booth, and Edward Koren. They happen to appear opposite each other. Beautiful work, perfectly placed on the page.

Just a few other observations: the Charles Addams drawing in the issue is in his experimental style of that time, a thinner line (pen), less wash.  As Addams told Dick Cavett in March of 1978: “I did that for awhile in the mistaken idea that it was an improvement.”

And here’s Ed Frascino’s drawing —  certainly in the running for a spot in the top ten longest New Yorker cartoon captions: 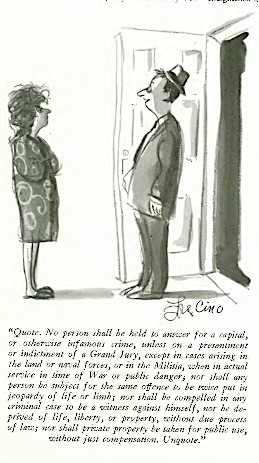 Here’s the caption in readable size:

Finally, the Chon Day drawing seems as if it could run today:

Brendan Loper on who’s behind Trump. Mr. Loper has been contributing to The New Yorker since 2016.