The Monday Tilley Watch is a meandering take on the cartoons in the current issue of The New Yorker.

This week’s cover (by R. Kikuo Johnson, who we learn from the Contributors page teaches cartooning at the Rhode Island School of Design) is of robots on their way to wherever robots go to. One has an on-the-go cup of coffee(?) while another carries an old-fashioned lunch box.  When I was a little kid, I was slightly fascinated by the lunchbox a neighbor (his name was Joe) carried to and from his factory job everyday. I sometimes wondered what was in his lunchbox and whether he had the same lunch everyday. Anyway, back to the cover. I thought seeing all the technology, it was going to be a Technology Issue, but no… it’s the Money Issue. The semi-Tilley on the Table of Contents alerts us to the theme:

Anyone who reads Ink Spill can probably guess that Tilley tampering (see yesterday’s Spill) will be duly noted here. Other examples : 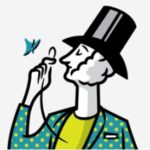 Now on to the issue’s cartoons, and it doesn’t take long at all to find one. A nicely placed Tom Cheney drawing appears on page 4 directly following the end of the magazine’s Table of Contents.  I like that the magazine does this every so often and not all the time.  It’s a fun surprise.  Mr. Cheney takes one of the cartoonist’s most reliable  characters, death, to an artist’s studio. Artists studios, and artists, were very popular in years past, especially in the James Geraghty era (the New Yorker’s art editor from 1939 through 1973). Many of the best were gathered in The New Yorker Album of Art & Artists (New York Graphic Society, 1970). 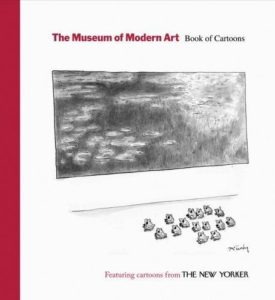 There’ve been several other art-themed collections since (shown above: The New Yorker Book of Art Cartoons (Bloomberg, 2005), and The Museum of Modern Art Book of Cartoons (Museum of Modern Art, 2008 — a custom production), but the 1970 collection  is the mother ship, containing some of the most famous art cartoons in the magazine’s canon.

Moving through the front of the magazine, I really like the beautiful photograph of a cow (in an ad for Louis Roederer) on page 15. What can I say? I love cows (to look at, admire, and occasionally pat on the head).

David Borchart has the second drawing of the issue. Age, of course, comes up most every time (heck, every time) there are Galapagos tortoises involved. Charles Addams (and there it is: an Addams reference and it’s only the second drawing of the issue) did several (I can remember three) — here’s one. Mr. Borchart delivers a caption that many can relate to, and just as many have probably heard said, or said.  As usual with his work, it’s beautifully drawn. The elder tortoises look kind’ve happy.

I don’t usually comment on the illustrations but I do really like the cup of coffee by Golden Cosmos on page 40. Six pages later we have an Amy Hwang  Jack and the Beanstalk drawing.  A more complicated drawing than we’re used to seeing from Ms. Hwang. I like the beanbag chairs — I picture them in color for some reason: left to right:  baby blue, brown, and rust colored.  Two pages later another keeper from BEK (Bruce Eric Kaplan). I’m reminded here of the late James Stevenson’s barely disguised textbook political satire.

On the very next page is a Mike Twohy cornucopia drawing. Cornucopia drawings aren’t as plentiful (haha?) as artist drawings once were, but they showed up from time-to-time, sometimes on the cover. Here’s a beauty by Arnie Levin from 1978 (and how convenient it is that it’s a baseball themed cover in this heavy-duty baseball time of year).

Mr. Twohy’s cartoon, referring to a certain mega-online shopping site, is concerned with way more than baseballs. Eight pages later is a darkish Ed Steed drawing. His fishnet roller coaster recalls Lou Myers’s style (a snippet from a 1969 Myers United Airlines ad below left. On the right, a portion of Mr. Steed’s drawing).

Three pages later a dog walk in the park drawing from the long-time Wildwood, New Jersey lifeguard (retd), John O’Brien. As mentioned in the last Monday Tilley Watch, Mr. O’Brien excels at captionless drawings (to my mind the hardest to do; Charles Addams told Dick Cavett captionless drawings were his personal favorites). Mr. O’Brien’s drawing is placed perfectly on the page.

Four pages later, newbie Maddie Dai returns with, yes, an Addamsy situation. If it seems like there are a lot of references to Mr. Addams in these posts it might be because his work — well over a thousand cartoons published in The New Yorker — touched on so many situations favored-by-cartoonists, especially, of course in his case, dark side situations. Of the notes I received from former New Yorker Art editor, Lee Lorenz during my years of his tenure (he was editor from 1973 – 1997;  I began receiving notes from him in 1977) at least three-quarters of them said, “Sorry — Addams already did this.”

Three pages following Ms. Dai’s drawing is a Julia Suits be careful what you say out there — it just might get you in trouble drawing. On the very next page is an oddity that’s now appeared for the second issue in a row (wait, does that mean it’s not an oddity anymore): a collaborative drawing by Kaamran Hafeez and Al Batt. Mr. Hafeez is responsible for the drawing itself. The setting is that old New Yorker cartoon chestnut: a  business meeting.

Three pages later, a drawing by Farley Katz, a cartoonist who always shakes things up somehow.  I like the complexity of the drawing – the stethoscope connecting both doctors with the patient —  but I’m unsure who the “we” is in this case. Even on a very large screen it appears both women’s mouths are open, suggesting that they are both speaking.  Someone write in please and clarify.

Three more pages and we find Batman, beginning his memoir, recalling his childhood.  Nice drawing by Zach Kanin. I like how he’s shown us the Wayne family portrait over the mantel.  When I see a New Yorker Batman cartoon I immediately recall this 1989 classic by Danny Shanahan:

Three pages following Mr. Kanin’s Batman is the the second sidewalk Liana Finck drawing in two issues.  The beginning of a sidewalk series perhaps?  I like the little birds on the sidewalk.

Alice Cheng, another newbie (her first New Yorker cartoon appeared in February of this year) is next with a salmon swimming upstream drawing. I love that this is here as it gives me an opportunity to recall the great 1998 Bill Woodman bears and salmon cartoon shown below.  Look at this drawing! Lovely, funny. This is what the late very great Jack Ziegler had to say about Mr. Woodman: “Bill Woodman is a great cartoonist and one of the funniest “draw-ers” of all time, right up there with George Booth.”

Three pages later, a drawing of mine. I believe it’s the first time that I’ve had Uncle Sam in a New Yorker drawing.  Four pages later is a not-quite-so-empty nest drawing by another newbie, Teresa Burns Parkhurst, who made her debut this month (not counting her caption contest appearance in September). I like the framed items on the wall, including the coffee mug, or mugs(?). On the very next page is what at first appears to be a doorman at an exclusive club situation.  But as it’s a Peter Vey drawing, it’s not, of course — it’s a writer needs to escape drawing. Nice stanchions!

The next to last drawing in the issue belongs to Avi Steinberg. A man at a diner counter encounters a teeny coffee cup.  As in an earlier drawing not long ago — not by Mr. Steinberg (I don’t think), I wonder about the level of the counter top in relation to the customer.  It’s either a very low counter, or a very tall customer. One wonders too if the customer is just walking by the counter and has remarked on the little cup of coffee.  There’s no indication of seating, so he isn’t about to sit; there are, however, items on the counter indicating customers might sit.  As I’ve said before, I like imagining a backstory. Good caption.

The final drawing in the issue (not counting the caption contest drawings) is by Carolita Johnson. A fortune teller!  As with Mr. Steinberg’s drawing, there’s some kind of perspective thing going on (with the door and the room) that caught my eye. You’ll see.