The Monday Tilley Watch is a meandering take on the cartoons in the current issue of The New Yorker.

Always a pleasure to see a colleague’s work pop up as a New Yorker cover as I open up the digital edition early Monday morning. We (“we” meaning the New Yorker‘s contributing cartoonists) used to be responsible (my unofficial estimate) for 60% of the covers during the year. Since Tina Brown’s era it’s somewhere around 1% to 5%. Roz Chast, Bruce Kaplan, Danny Shanahan, Harry Bliss, and George Booth would be the five percent. In 2017, just Ms. Chast’s and Mr. Kaplan’s work appeared on the cover.  In 2016, it was just Mr. Shanahan’s; in 2015 just Mr. Bliss’s work appeared on the cover — well, you get the idea). This one by Ms. Chast is graphically eye-catching.  It was ever-so-slightly difficult to appreciate on the tablet, so it was off to the laptop for a bigger image. I think the cover perfectly captures some people’s notion  (or reality) of January in New York City. The scarf knitted, then lost days later on the train, is shown on the magazine’s strap (the traditional vertical border running on the left side of the magazine’s covers) — it’s a nice touch.

Moving into the magazine I noted an attractive snippet of a Grant Snider drawing from a Daily Shouts piece. The blues reminded me of William Steig’s blues he used in a great number of his children’s books.

Oh, here’s a thought: why not reinstate Rea Irvin’s iconic Talk of The Town masthead in the magazine’s 93rd anniversary issue — just a few issues away. How great would that be! Mr. Irvin’s is directly below, with the re-do directly below it.

To read more on the Mr. Irvin’s gem and its replacement, check out this Spill piece.

Now on to the magazine’s cartoons. The first, by Amy Kurzweil, appears on page 19. A somewhat dark (yet not-so-dark!) take on flight delays.  I’m guessing many would enjoy a bonus three hours of life.  Nice handling of the plane out on the tarmac. Eleven pages later, the aforementioned Bruce Kaplan has a couple of kitties chatting in a living room.  As one who came later to cat appreciation, I appreciate the sentiment of the drawing, as well (as usual) as the drawing itself.

Noted along the way from Ms. Kurzweil’s drawing to Mr. Kaplan’s: Rui Ruireiro’s spot drawings making good use of yellow.  I see the predominant use of yellow in the New Yorker (especially if it involves a yellow cab, such as on page 28) and I’m immediately reminded of Steinberg’s masterful use of it on a cover back in 1979: 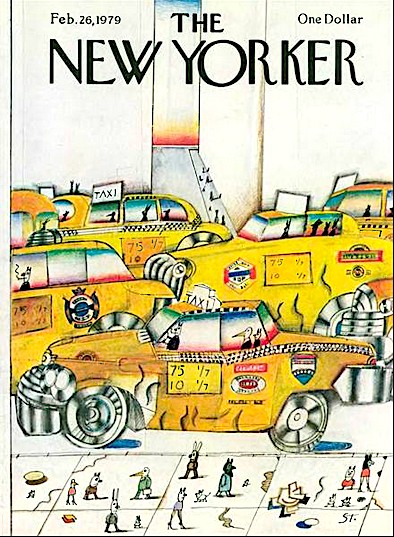 Four pages following Mr. Kaplan’s kitties, a wonderful Edward Koren drawing (wait, is there any other kind?). As with the last number of Koren cartoons published this one is given ample space to breathe on the page. Textbook placement.

On the very next page a drawing by a relative newcomer, Pia Guerra. Who knew guessing weights at a carnival could lead to violence.  By the look of the weight guesser he has yet to be pummeled.

Three pages later, a rather large funnel, or, ah, tunnel, drawing by Colin Tom (sorry, no website for Mr. Tom, that i know of. Please advise). I kind’ve wish this wasn’t in a boxy border (it’s obvious by now — maybe?– that I believe New Yorker cartoons thrive in a roomy habitat). On the very next page, an Amy Hwang drawing with a terrific caption.  I was about to note that this was a cat-free Hwang drawing when I spied a framed kitty on the cubicle wall.

The cartoons keep-a-comin in this issue: two more on the next two pages. The first by David Sipress and and the next by Paul Noth. Mr. Sipress’s recalls David Letterman’s, “I do and do and do for you kids — and this is what I get.” Mr. Noth’s refers to one of my favorite scenarios: the old women who lives in a shoe. In this case she’s spending some down time at a bar. I must say that the self-proclaimed old woman in Mr. Noth’s drawing appears quite young.  Perhaps she’s just starting out in life, in the shoe? Ten pages later a subway drawing couched as a personal hygiene drawing by Carolita Johnson. Clipping one’s nails while riding the subway seems risky.

On the very next page, a Joe Dator drawing that set-off the Spill‘s applause meter.

Another five pages later, a Mick Stevens doctor’s office. I spent a lot of time trying to figure out  if what appears to be a jar of rubber glue on the front right of the desk is in fact a jar of rubber glue.  Four pages later a Frank Cotham drawing in a very familiar Frank Cotham scenario. On the very next page, the last drawing of the issue, not counting the caption contest: a charming charming Liana Finck drawing. I don’t know why, but I wanted the Earl of Sandwich to be the one asking the other guy the question. The cartoonist’s fuss-o-meter never rests.