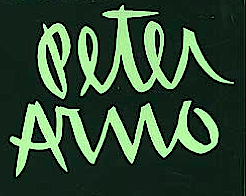 I’m pleased to announce that  Mad At Something, my biography of the late and very great New Yorker cartoonist, Peter Arno will be published by Regan Arts.

Arno is one of the pillars of The New Yorker‘s earliest days, a group that includes Harold Ross, E.B. White, Katharine White, and James Thurber.  Ross, the magazine’s founder and first editor called Arno “our pathfinder artist”  and “the greatest artist in the world.”  It is indeed the case that Arno’s work for the magazine raised the graphic bar so high that “New Yorker cartoon” became synonymous with excellence in the field.

The idea for an Arno biography began back in 1999 in true cartoonist fashion: as an A-Ha! moment as I was driving in the vicinity of Arno’s home just outside of Manhattan; I realized that he had never been the subject of a biography.  Since that moment I’ve spent the past fifteen years researching and writing about his life.

Mad At Something is not just an examination of Arno’s life and work, it is also an exploration of the birth and development of the New Yorker cartoon, as well as the magazine’s fabled art department, and its artists. One of the many wonderful things about being a New Yorker cartoonist is the opportunity it’s afforded me to meet other New Yorker cartoonists.  Since beginning the biography I’ve reached out to my colleagues asking them to share their thoughts on Arno’s work. The list includes Arno contemporaries such as William Steig, Syd Hoff, Robert Weber, Frank Modell, Eldon Dedini,  Ed Fisher, through post-Arno contributors such as Jack Ziegler, Roz Chast, Peter Steiner,  Bruce Eric Kaplan and Edward Sorel.  I am especially pleased that the book’s curtain closer is composed of their contributions.

Mad At Something will be published in 2016.