In a special edition of Jane Mattimoe’s Case For Pencils she interviews the legendary Ralph Steadman.  Mr Steadman (seen to the left Skyping with Ms. Mattimoe) has contributed illustrations to The New Yorker as well as an “Artist Sketchbook” or two —  read the Pencils post here!

Andy Friedman aka New Yorker cartoonist, Larry Hat, calls our attention, graphically and otherwise, to Andrew Wyeth’s 100th Birthday celebration down in Wyeth country along the Brandywine River in Pennsylvania.  Read all about it.

A Language Blog Looks At the Language of New Yorker Cartoons

As you see, Mr. Zwicky’s blog is “mostly about language”; when it’s about the language of New Yorker cartoons it will be mentioned here,  such as this post.

“How Do You Draw the Devil?” 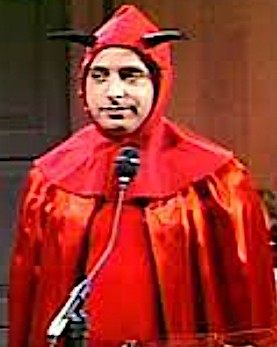 It’s no secret I’m married to a fellow New Yorker cartoonist, Liza Donnelly (we published a book about it). One would think that by now I would have a reasonably good understanding of her cartoon vocabulary, but this morning while she was sitting nearby, drawing on her tablet, time stood still for a moment when she suddenly spoke up:

“How do you draw the devil?”

Me: “What? You’ve never drawn the devil?”

Me: “Well, think of Jon Lovitz.” [The devil was just one of Mr. Lovitz’s many memorable characters on Saturday Night Live ].

Within a minute or two, Ms. Donnelly, apparently in a political mood, produced her first devil drawing. I love that she gave him a mustache.