This is third part of an Ink Spill series looking at newer New Yorker cartoonists. I asked three of the most recent additions to the magazine’s stable of artists to tell us a little about themselves and how it was they ended up at The New Yorker (previously we heard from Liana Finck and Edward Steed). The  series wraps up with the newest of the trio: Charlie Hankin, whose first cartoon appeared in The New Yorker this past August (a Hankin cartoon from The New Yorker, October 14, 2014 appears below). 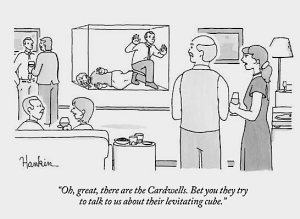 I’ve been drawing cartoons in some form or another, on and off, since I was a kid. My main inspirations were strips and long-form pieces; I was young when Calvin and Hobbes stopped running, but I think I had read every strip by the time it ended, as well as most of the Tintin books. Eventually I grew into the more mature comics we had lying around the house–my dad curated a show of original work from Art Spiegelman’s RAW in 1987, and his complete collection of the series was a major discovery for me when I was a teenager. But gag cartooning always appealed to me, and I pored over anthologies of cartoons from Punch and The New Yorker.

My interest in cartooning went through cycles. I did single-panel bits for my high school newspaper, and then nothing until a single installment of a graphic-novel/zine I drew in college. After school, I got deep into realist painting. I also started a comedy webseries called Good Cop Great Cop with my friend Matt Porter. Maybe the merging of art and comedy finally attracted me to cartooning for The New Yorker. Either way, it seemed like a good fit: both the webseries and my paintings have undertones of dry, quiet absurdity.

Since entering the fold, it’s been great to meet some of the big names in cartooning–Roz Chast, David Sipress, Sam Gross, and of course Bob [Mankoff]. Ben Schwartz and Liam Walsh have both given me guidance. And I dig around the archives for extra inspiration. Much older generations aside (Chas Addams, Peter Arno, et al.), I love Mick Stevens, Mike Twohy, Tom Cheney, Leo Cullum, Jack Ziegler, Danny Shanahan, and too many others to name.