And here’s part two of Ink Spill‘s look at some of the newest New Yorker cartoon contributors. If you saw the piece about Liana Finck the other day you’ll remember I’ve asked a trio of fresh faces to tell us a little about themselves and how it was they ended up at The New Yorker. Today we hear from  Edward Steed, who hails from England (joining a stellar cast of our colleagues from across the Atlantic, including Alfred Leete*, who was in the very first issue of The New Yorker).

Mr. Steed’s first New Yorker appearance was in the issue dated March 4, 2013 (an example of his work is below. The cartoon appeared in The New Yorker September 16, 2013).  Mr. Steed has graciously provided Ink Spill with a self portrait.

The floor is now all his: 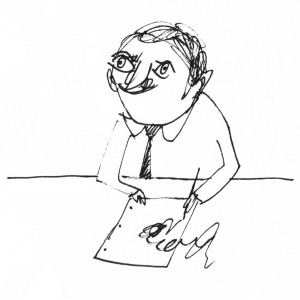 I discovered New Yorker cartoons recently, just a couple of years ago. I saw them online and decided I would like to do that too. I hadn’t been interested in cartoons since I’d outgrown the stuff I looked at when I was young, but these were clearly different. I started writing down ideas straightaway.

When I had a bunch of what I thought were good ones I sent them in. Didn’t know about the Tuesday deadline or how the system worked, I just kept sending as many as I could come up with. I hadn’t really drawn cartoons since I was a child. I had no style. So I hoped to impress with quantity. I did that for a few months and heard nothing. Eventually, Bob Mankoff phoned and said he wanted to buy a few of them.

After that, I quit my job and went to New York (I’m from England). I bought the New Yorker magazine for the first time at the airport and read it on the plane, I liked it.
Went to the Tuesday meeting and met Bob and some of the other cartoonists. Everyone was great, very kind and welcoming. Karen Sneider took me to an art shop and explained what kinds of pens cartoonists are supposed to use. Sam Gross showed me round the cartoon section of the Strand bookshop.

& I’ve been drawing cartoons for the magazine fairly regularly since then. 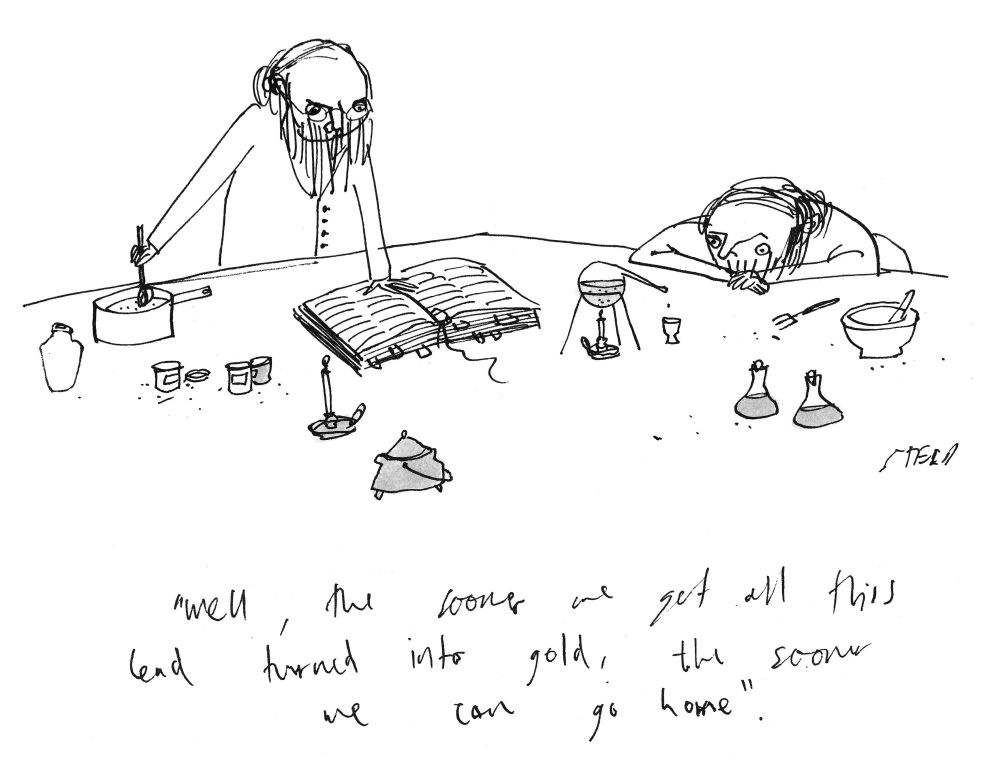 Alfred Leete  (photo above)  Born at Thorpe Church, Northamptonshire, England,  August 28, 1882; Died in London,  June 17, 1933. The son of a farmer, Leete had no formal art training. According to his obit in The Times of London, June 6. 1933: “…his work early showed a keen sense of humour and a bold technique, and was welcomed by the principal illustrated weekly papers and magazines.”    NYer work: appeared in the very first issue of The New Yorker, February 21, 1925. Mr. Leete is uncredited in The New Yorker’s database (listed only as “unidentified”).  As of February 27, 2013, he’s been identified (with the assistance of colleagues, Rick Marschall, Mike Lynch  and Brian Moore). A website bio