Thirty or forty years ago, a new cartoonist published in The New Yorker  was about as rare as The New Yorker messing with its fabled Irvin typeface. That’s changed in recent years, as more and more cartoonists are embraced by the magazine. In the upcoming documentary film,  Very Semi-Serious, Bob Mankoff, the New Yorker‘s current cartoon editor, says, “When I became cartoon editor I realized this was a plane that was gonna run out of fuel. Unless we interceded this was going to be the last generation of cartoonists doing this.  I made it an open call.  So now all you have to do is call and say I want to show you my cartoons.” The open call policy has resulted in a sometimes lively scene on Tuesday mornings in and around the Cartoonists Lounge, a small rectangular room just a few feet from Mr. Mankoff’s office. Aspiring cartoonists mingle with veteran contributors as well as more recently added contributors.

This week Ink Spill checks in with three of the newer cartoonists whose work has been published in the magazine. I’ve asked each to tell us a little about themselves and how it was they ended up at The New Yorker. First up is Liana Finck, whose first cartoon (below) appeared in The New Yorker exactly one year ago today, February 25, 2013. 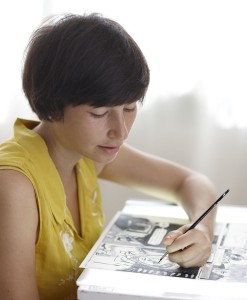 My parents tell me that I started drawing when I was five months old. Drawing was the thing I loved to do, and it earned me praise; it was my ticket into the world. I needed a ticket, because when I was a kid I was an awkward weird-o who couldn’t make eye contact or talk loudly enough for people to hear, and who was brought to fear and trembling by the sound of blenders, vacuum cleaners. There was always a strong connection for me between making pictures and looking at them. I think I started to draw early because I was surrounded by pictures. My mom drew all the time, virtuosically and with joy–watching her draw was magic. Our house was also full of children’s books. I still read them: William Steig, Maurice Sendak, Maira Kalman. Those books still seem to me like the most sophisticated – and the most human – form of expression.

I’ve been under the spell of The New Yorker since I was twelve or fourteen. My family had donated to WNYC and received a year of the magazine as a free bonus gift. (They’ve been renewing their membership since then). One of my first New Yorker memories is of Saul Steinberg’s obituary. Something clicked when I looked at the pictures that accompanied it. I also remember looking at Roz Chast’s cartoons for the first time, and falling in love. I rediscovered Maira Kalman and William Steig, whom I had known from their children’s books. These drawings were the adult versions of the brilliant kids’ books illustrations that had always enchanted me.

The more streamlined, punch-liney, black and white New Yorker cartoons fascinated and daunted me. I was funny, and I was good at drawing, but my mind sprawled all over the place, ran in tangents. My life’s struggle has been to impose order on this chaos, and so I’ve always been attracted by precise art-forms in which every tiny piece matters. It seemed natural that I should try my hand at some cartoons. I tried, gave up, tried again. I sent a few cartoons to the New Yorker when I was sixteen. They were really bad. I don’t remember getting a rejection slip. I kept drawing them, but didn’t send any in again for a few years. I felt like I’d crossed a boundary that shouldn’t have been crossed.

In a drawing class I was taking Sophomore year at art college, in which we were allowed to choose our own projects, I hung fifty cartoons I’d made on the wall during my critique. Suddenly, the classroom emptied of students. I’m still trying to figure out what that was all about. Were the cartoons terrible? (Yes). Did the other kids hate New Yorker cartoons in general? (Yes). Was it disrespectful to make New Yorker cartoons for a drawing class? (Yes, but screw the academy). I felt like a presumptuous monster. I sent the cartoons to The New Yorker by mail. I got a rejection slip that time.

I came to The New Yorker’s office with a batch when I was twenty-four. The cartoonists in their waiting room were very nice. Bob Mankoff, the editor, was encouraging. He flipped through my cartoons and said, “Print these out bigger and bring them back.” I meant to, but I kept putting it off. I was afraid I’d misunderstood him somehow. I stayed away for two years.

I came back when I was twenty-six. This time, the stakes were less high than they’d seemed in the past. I was working on a graphic novel, and I felt anchored by it. I wasn’t as desperate to be ‘discovered’ as a cartoonist – I just wanted a reason to draw cartoons, and showing them at The New Yorker felt like an adventure. By coincidence, the day I went in, a film crew was shooting for a documentary about the New Yorker cartoons, and many of The New Yorker cartoonists were there, and a lot of prospective cartoonists. I had to wait for hours and got to know a bunch of people. I was happy. The gathering felt like a meeting of like-minded people, not a club I didn’t belong to. I decided to keep coming back every week. And I did.

Forcing myself to make ten cartoons every week has taught me how to fight various demons, including the big one: writer’s block. I’ve become a much stronger and saner graphic novelist, writer, human. I love the process of making New Yorker cartoons (especially the process of coming up with them. Free-drawing makes me feel completely alive), but I still feel self-conscious, like I’m trying to impersonate some witty, dapper New Yorker Cartoonist I have in my head. I’m missing something that I think other New Yorker cartoonists have: the ability to think objectively, translate an idea into a picture. I have something else, instead – a mind that makes surprising, organic leaps, and can’t do anything else. I used to think this was a failing, caused by the same thing that made me a weird-o when I was a kid, but I wonder now whether it’s just a way of thinking many people have: writers? Artists? Women?

I need to learn certain things from that idealized New Yorker cartoonist who lives in my head. How to be prolific rather than perfect. How to force myself to take a step back sometimes, as if this (being good, being noticed) weren’t the only thing that mattered to me. How to learn from my mistakes. By learning these things, I believe that I will finally learn how to acknowledge my real thoughts and feelings, survey them without falling in, and give them form, let them out.

A Bintel Brief, will be released April 15th from Ecco Press.

An excerpt from Ms. Finck’s webcomic, “Diary of A Shadow” appears below.  Click on it to enlarge.