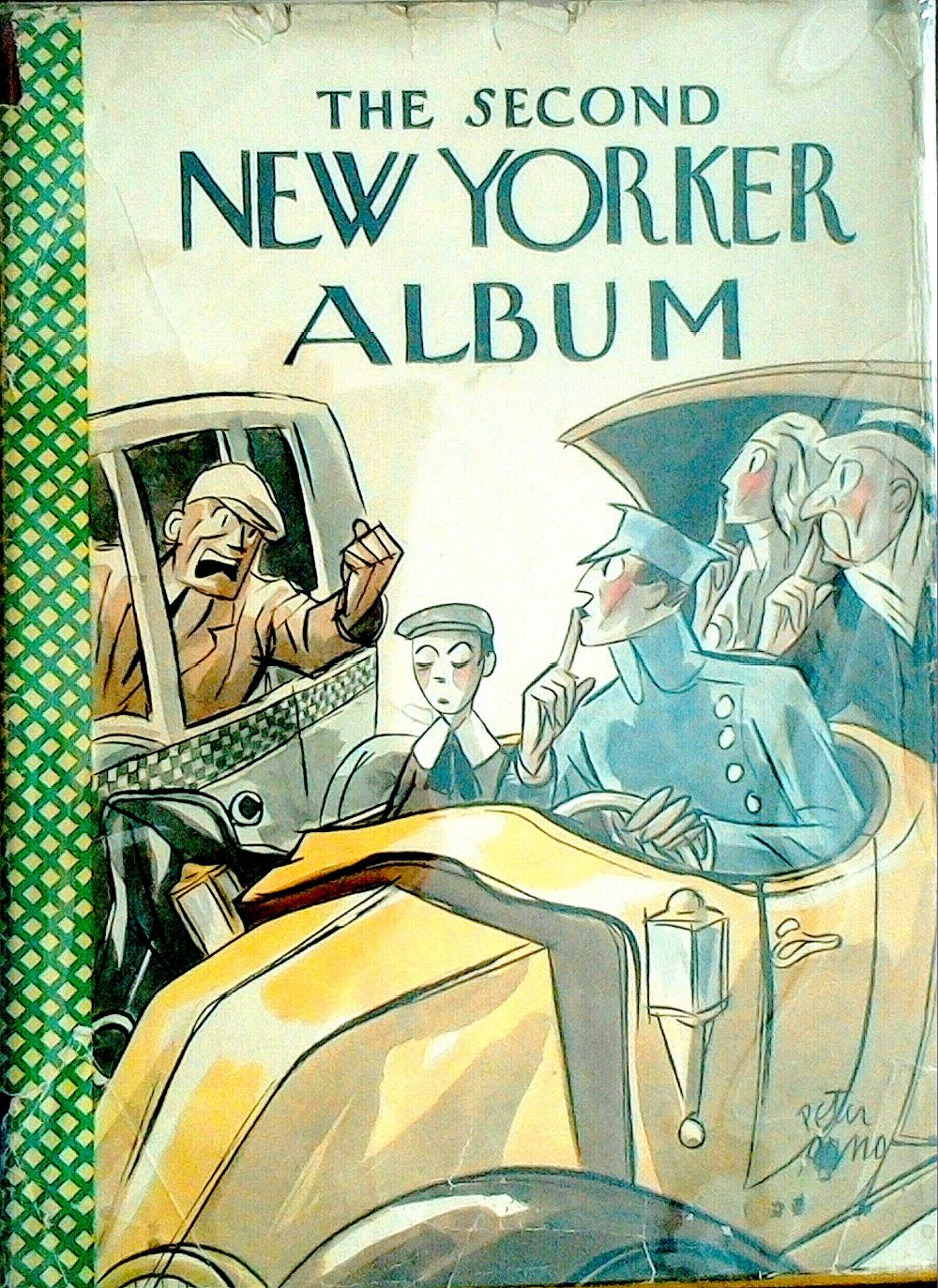 We’ll just keep looking at New Yorker Albums on Sundays until we run out of Albums to look at. Today it’s the Second Album, published by Doubleday, Doran & Co. in 1929. By 1929 the magazine was on track and feeling its oats —  its near-death in 1925 was just an unpleasant memory. The Album’s cover, originally on the magazine itself (the issue of September 15, 1928) is by Peter Arno. The Foreword, credited to The New Yorker, spends some time answering “Who thinks up the ideas?” 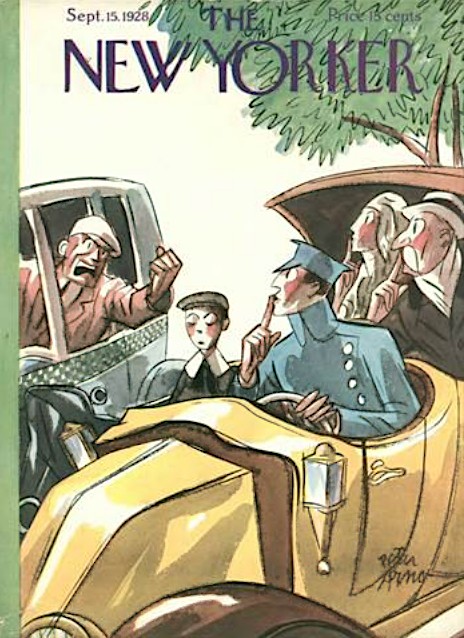 Carl Rose’s newly famous “It’s broccoli, dear.” “I say it’s spinach, and I say the hell with it.” (published December 8, 1928) not only appears in the Album, it’s presented all by itself on the back cover, and is mentioned in the Foreword.  It’s further elevated by the front flap text:

The Album contains an all-star lineup including Helen Hokinson, Arno, Rea Irvin, Gluyas Williams, Alan Dunn, Mary Petty, Otto Soglow, Reginald Marsh, and Barbara Shermund (the period covered  is pre-Thurber as cartoonist, and pre-Addams, in case you’re wondering why they’re not mentioned).  Unless you’re a New Yorker Cartooniac, I suspect that most of the work in the Second Album will be unfamiliar.  Even though it’s a sort of greatest hits from the magazine since the first album was published (just a year before!) many of these drawings never appeared again in the big round-up albums of later years (the 25th Anniversary Album,  the 50th Album, the 75th Anniversary Album, or the weighty Complete Cartoons of The New Yorker from 2004). Herein you’ll see work by Nora Benjamin, Johan Bull, and One Clubbers* Milt Gross and Palmer (about whom I know nothing, other than his or her name — first or last? — is Palmer). There are also a few cartoons with signatures that require more sleuthing than I have in me. I also spotted one cartoon — a lovely drawing– in an unfamiliar (to me) style with no signature at all. Looking through the collection this morning I found a cartoonist I’d never known about: John Elmore (he will be added pronto to the A-Z).

So plenty to discover and wonder about and/or puzzle over — but mostly, to enjoy in this Second Album.  If you’ve ever wondered why the New Yorker‘s cartoons have fascinated for so long, look no further than the work in this Album. Diversity of style — the not-so-secret ingredient — is fully on display here, from the sleight-of-hand simplicity of Gluyas Williams’ line to the density of Reginald Marsh’s and everything in between.  The work succeeds.

Below: early Otto Soglow.  A far cry from his Little King style.

*The One Club is the Spill‘s way of indicating that a particular cartoonist was published only once in The New Yorker.  Every one-timer’s entry on the A-Z  is accompanied by the small red top-hatted fellow shown below.  To qualify for inclusion, twenty years have to have passed following that first and only appearance.

Note: The Second Album is not difficult to find.  AbeBooks.com has two copies.  Finding one with its dust jacket though, well, that might be more of a hunt.