The other day I posted three Helen Hokinson covers for The Stage.  Courtesy of collector extraordinaire, Warren Bernard, I’m now posting a fourth. How many more are out there?

Helen Hokinson  Born, Illinois,1893; died, Washington, D.C., 1949. New Yorker work: 1925 -1949, with some work published posthumously. All of Hokinson’s collections are wonderful, but here are two favorites. Her first collection: So You’re Going To Buy A Book! (Minton, Balch & Co, 1931) and what was billed as “the final Hokinson collection”: The Hokinson Festival (Dutton & Co., 1956). According to a New Yorker document  produced during Harold Ross’s editorship (1925-1951) rating their artists, Ms. Hokinson and Peter Arno occupied a special category unto themselves above all others.

From The New Yorker‘s online Culture Desk, February 4, 2020, “Stop Thief! My Cartoon Gets Appropriated”  — this piece, by David Sipress, on the appropriation of his above 2006 New Yorker  cartoon.

Mr. Sipress has been contributing to The New Yorker since 1998.

Christopher Weyant on tonight’s State Of The Union address. Mr. Weyant has been contributing to The New Yorker since 1998.

Yesterday’s Daily Cartoonist & Cartoon: a splashy post-Super Bowl drawing by Trevor Spaulding, who began contributing to The New Yorker in April of 2014.  Visit his website here. 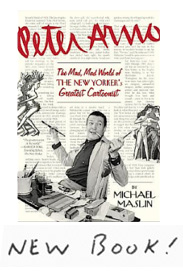