Above: In 1985 Henry Martin, pictured front & center with his hand on the railing, brought together a bunch of his cartoonist colleagues for an exhibit of cartoons at Princeton’s McCarter Theater. Among those in the photo: Al Ross, Arnie Roth, Arnie Levin, Ed Arno, Bernie Schoenbaum, Stuart Leeds, Peter Porges, Sam Gross, Bill Woodman, John Jonik, Mort Gerberg, and Boris Drucker. George Booth is in the back row, nearly dead center — I’m to the right of him, partially obscured.

In the late 1970s, I was a freshly minted New Yorker cartoonist walking for the first time into the magazine’s cartoonists waiting room just outside the art editor’s office. It was not a comfortable entrance: I didn’t know a soul. I was in a very small room with some of the biggest stars in The New Yorker cartoon universe. They were drinking coffee, and chatting with each other. It was, of course, intimidating. One of the stars stepped away from his colleagues and introduced himself. It was Henry Martin. Fate couldn’t have chosen a better good will ambassador to welcome me. Even today, four decades later, thinking of Henry, who passed away on Tuesday, I think — to lightly paraphrase George Booth — good thoughts about one of the kindest friendliest cartoonists I ever met. In the pool of friendly faces at The New Yorker, Henry’s face, in the years to come, was among the friendliest.

I was a bit self-conscious about my signature in those first years — afraid others might think I was some kind of Henry Martin signature stealer — at a quick glance they might appear similar, but  Henry’s graphic stamp had that distinctive lovely right leaning “H” coupled with “Martin.” Yet there were a few times I’d receive his New Yorker mail: Martin mistaken for Maslin  — it would give us a chance to have a long distance laugh.

In the 1960s and 70s, when it seemed every magazine ran cartoons, Henry’s work seemed to be in just about every one of them; he was the everywhere cartoonist.  I’m not sure anyone else came close. My thinking was, then, that’s the way to do this — that the Henry Martin model was the model. Be everywhere. Turned out that Henry’s model was Henry’s model, not for everyone — it was the way for him to go in a career that lasted from the 1950s until the late 1990s. 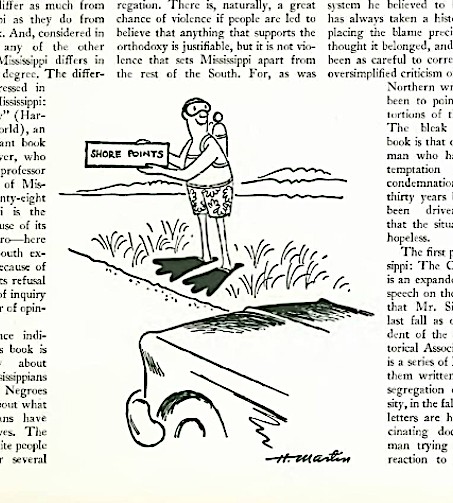 Above: Henry Martin’s first New Yorker cartoon, in the issue of August 15th, 1964

There’s a good reason someone lasts so long at The New Yorker. When you look at any of Henry’s  691 New Yorker cartoons you’re immediately taken in, and then, of course (of course!) you’re rewarded with laughter. There’s no furrowing of the brow as you take your first look at one of his cartoons, there’s no wondering about peripherals, such as where you are (something important to the magazine’s founder and first editor, Harold Ross, who was known to ask, when looking at art up for consideration, “Where am I in this picture?”). With Henry’s drawings you knew where you were, and you were given a rock solid cartoon with a rock solid caption. Here’s an example from The New Yorker issue of April 23, 1979:

This cartoon is what is called an “evergreen” — we all understand it, we all always will, and it will always be funny. Henry once said to me, “Some cartoonists draw funny” putting into words something I’d felt but never defined. The definition has added to my understanding of one of the essential ingredients that makes for work that excels (I used his definition here on this site just a few days ago when referring to Dean Vietor’s drawings).

As for how Henry worked, his editor Lee Lorenz told me during an interview [Lee’s remark on Henry’s method begins at 59:47 during the interview] that Henry “would put a [blank] piece of paper down and he would stare at that piece until he had an idea. Then he would take another piece of paper.”

Henry’s other significant contribution to the magazine were his hundreds of “spot” drawings (his daughter, Jane Read wrote the other day that his first sale to The New Yorker, in 1950, was a spot drawing). These drawings would be familiar to anyone who read the magazine in the William Shawn era, when spots, drawn by a variety of contributors, were placed throughout the magazine, unrelated to each other, and not telling a story as they do these days. I’ve always thought of spots as little gifts to the reader; something unexpected to consider, if only for a few seconds (or, in the case of the one shown here, more than a few seconds).

The last time I corresponded with Henry I was pulling together quotes from colleagues about Peter Arno. Here’s Henry’s quote in the Arno biography:

Jim Geraghty [the New Yorker’s Art Editor from 1939 -1973] bought three ideas from me for Arno in 1964 and 1965. He was the master, but like so many of the greats the idea wells ran dry, but, lord, how they could create memorable drawings.

And now I say to you, Henry Martin, whose idea well never ran dry: lord, how you could create memorable drawings!

For more on Henry Martin:

Back in March of 2011,  Mike Lynch posted a 1972 CartoonistPROfiles interview with him. See it here.

A tribute from the Firestone Library can be found here.

The Cartoons: There are two collections of Henry Martin’s work (both published by Scribner, both published in 1977).  His work can be found in every New Yorker cartoon album, beginning with The New Yorker 1955-1965 Album. You can also see his work online by just adding “Henry Martin cartoon” into the search box, or go to The New Yorker‘s Cartoon Bank 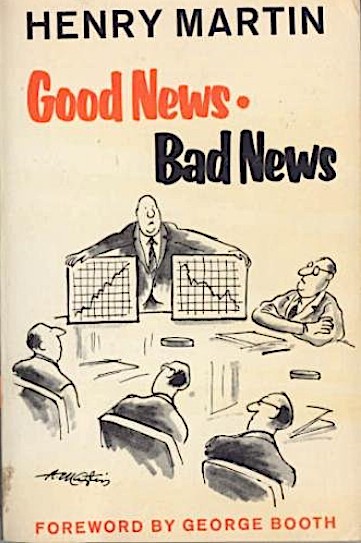