Sad news tonight (via David Pomerantz) of the passing of one of the great New Yorker cartoonists, Henry Martin. Mr. Martin contributed 691 drawings to The New Yorker from 1964 through 1999. (The Spill will post its appreciation of Mr. Martin tomorrow). 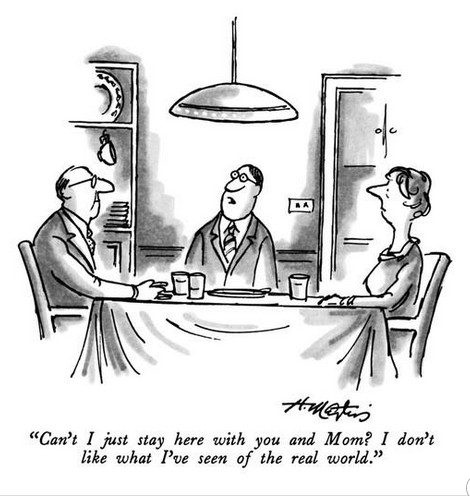 Above: a Henry Martin drawing, published in the The New Yorker, February 27, 1989.

His daughter, the celebrated author Ann M. Martin, posted (on FB) this piece written by her sister, Jane Read Martin.

My father, Henry Martin, passed away yesterday, June 30th, two weeks shy of his 95th birthday. I’d like to share what my sister Jane wrote, which I think he would have thoroughly enjoyed:

Longtime New Yorker cartoonist Henry Read Martin (who signed his cartoons H. Martin) died on June 30, 2020, just two weeks shy of his 95th birthday. For a man who had dealt with serious heart issues since he was fifteen, his sweet, loving, funny ticker sure gave him his money’s worth.

Also known as Hank, Martin was born in Louisville, KY, where he attended public schools until entering Texas Country Day School in Dallas, TX, now known as St. Mark’s School of Texas. He graduated from Princeton University in 1948, after which he attended the American Academy of Art in Chicago. Hank then headed back East and began his 45-year career with The New Yorker magazine. He sold his first drawing — known as a “spot” (the small drawing inside a story) — to The New Yorker in April 1950, though it was another 14 years before he sold his first cartoon there. He was also a longtime contributor to Punch magazine and The Spectator in England and for fifteen years had a daily syndicated newspaper cartoon called “Good News/Bad News.” Collections of his cartoons included Good News/Bad News and Yak! Yak! Yak! Blah! Blah! Blah!, both published by Charles Scribner’s Sons. Hank received the National Cartoonist’s Society’s Gag Cartoon Award in 1978 and also illustrated many books published by Peter Pauper Press.

In 1953 Hank married Edith (Edie) Matthews and they settled in Princeton, NJ, where they raised their two daughters and Edie taught pre-school. It was Edie who noticed a sign for a one-room office for rent across the street from the Princeton University Press that became Hank’s studio for close to forty years. For years he commuted to it on his bicycle and friends often stopped by his window to say hello. Despite working with pen and ink, Hank always wore a coat and tie to work “because you never know when someone is going to stop by and ask you to lunch.” In fact, every Thursday for over ten years, Hank and other Princeton cartoonists such as Arnold Roth, Clarence Brown and Mike Ramus met regularly for lunch at the (now defunct) Annex Restaurant on Nassau Street.

On Wednesdays Hank would take the bus into New York “to peddle his wares” at The New Yorker, Good Housekeeping, Ladies’ Home Journal and The Saturday Evening Post. Wednesday was “Look Day” at The New Yorker where the cartoon editor chose potential cartoons from each artist. Hank capped those days with lunch with the New Yorker cartoonists, a group often consisting of some combination of George Booth, Roz Chast, Sid Harris, Lee Lorenz, Nurit Karlin, Mort Gerberg, Sam Gross, Frank Modell, Jack Ziegler, Warren Miller and Peter Porges (who usually sold his drawings elsewhere but regularly joined the lunch). It was a long-held tradition: in the 1940’s the cartoonists’ lunch included such luminaries as Charles Addams, Charles Saxon, Barney Tobey, Whitney Darrow and William Steig.

In Princeton Hank served on the boards of several local Princeton organizations including SAVE, McCarter Theater and Friends of the Princeton Public Library. The Special Collections at Princeton University Library holds over 500 of his original cartoons published in the New Yorker and other publications along with 680 pen drawings for the famous New Yorker ‘spots.’ Also included in the collection is a complete set of his illustrated books and other archival materials. Hank also contributed cartoons and drawings to the Princeton Alumni Weekly as well as other Princeton University-themed mailings throughout his career and into retirement. In addition, the Morgan Library in New York City holds eight of his cartoons in its permanent collection.

Hank and Edie remained in Princeton until moving to Pennswood Village in Newtown, PA in 1998. Edie predeceased him in 2010. He is survived by his sister Adele Vinsel of Louisville, KY, two daughters, “The Baby-Sitters Club” author Ann M. Martin and Jane Read Martin, as well as son-in-law Douglas McGrath, grandson Henry, and eight nieces and nephews.