I first met Bill Woodman, like I met so many New Yorker cartoonists in the late 1970s, in the Grand Ballroom of the Pierre Hotel on 5th Avenue during an anniversary party for the magazine. Those February shindigs were always done in style (a post WWII style, to be honest). A long table of food was set up near the entrance to the ballroom. Toque-wearing chefs manned the table. Off to the left was a temporary bar. The cartoonists could always be found clustered there; Jack Ziegler, the tallest among us, was the beacon we cartoonists headed towards. It was within this bar cluster I was introduced to Woodman. Not big on eye contact, he had a penchant for gazing out in the crowd, his eyes squinting, while he sputtered out a clipped sentence or two. He seemed comfortable letting the party noise do all the talking.

I was already a fan, having studied his work in the pages of The New Yorker. Woodman’s stood out for me as it seemed very much a part of the school of Thurber. That school included the likes of Dean Vietor, Arnie Levin, Charles Barsotti and George Booth. All share a line that seems effortlessly energetic, with Woodman’s line possibly tying with Vietor’s for most rambunctious. A New Yorker cartoonist colleague, Henry Martin, once said that certain cartoonists draw funny. Sam Gross speaking to me about Woodman just the other day put Woodman solidly in that category.  You look at his people, or animals and you’re more than halfway to loving the cartoon. Another New Yorker colleague, Peter Steiner, has said of Woodman’s work, “To me he’s one of the very best. Funny drawings beautifully drawn.”

I asked Jack Ziegler, the godfather of contemporary New Yorker cartoons and cartoonists, to weigh in on Woodman and here’s what he had to say:

Bill Woodman is a great cartoonist and one of the funniest “draw-ers” of all time, right up there with George Booth.  Back when we used to hang out together, he allowed me the privilege of looking over any number of the obsessive sketchbooks that were always within his easy reach, usually right there in one of the overlarge pockets  of his surplus Air Force overcoat.  They were filled with casual observations, preliminary ideas for cartoons, and reprimands to himself about why he wasn’t coming up with any good ideas on any particular day.  Each page was chock full of bits and pieces that were wry, engaging, and all just plain funny to look at.  I never had a better time looking at anything in my life.  Why The New Yorker didn’t use a ton more of his work over the years was a never-ending, mind-boggling mystery to me.

As Jack mentioned, we haven’t seen Woodman’s work in the New Yorker for over a dozen years, and more’s the pity (according to his website, he has retired).  I’m not much for ranking or categorizing cartoonists. Number of times published doesn’t necessarily translate into how brilliant one is as a cartoonist (there were one hundred and forty-five Woodman cartoons published in The New Yorker). It’s tempting though to say that Woodman’s work is right up there with Ziegler’s as part of an inspiring school of daffiness that we see still playing out in today’s New Yorker.

Looking around the internet recently I couldn’t find much about Woodman. His website offers this abbreviated bio:

Born in Bangor Maine in 1939. At the earliest possible opportunity he joined the navy and served on the SS Timmerman and in Germany. Upon discharge, he took the next bus to New York, knowing that that was the place to start his cartooning career. He says he didn’t know how bad he was so he began submitting his work.

In 1962, he sold his first cartoon to Saturday Review. He worked a variety of day jobs until making his first sale to The New Yorker in 1975 to which he has contributed to this day. In addition he has appeared in Playboy, National Lampoon, Audobon. The New York Times, Gourmet Magazine and Barrons to name a few. He has published a collection of his own work: “Fish and Moose News”

As we approach Woodman’s 80th birthday it seemed now was as good a time as any to get a few more clipped sentences out of him.

The following is taken from two taped interviews. A fellow cartoonist, Mike Lynch, agreed to ask Mr. Woodman my initial set of questions while visiting at Woodman’s studio in Maine [Woodman doesn’t do email]. Mike was in the company of New Yorker cartoonist John Klossner as he posed my questions.   My hearty thanks to Mike for taping and transcribing Woodman’s responses and for facilitating the interview. Following-up on that interview, I phoned Mr. Woodman and we chatted for awhile.

Michael Maslin: You made your publishing debut in the pages of The Saturday Review in 1962, but  it took you a little while to break into The New Yorker – not until the end of 1975.  Were you sending work to the New Yorker all those years in between?

Bill Woodman: I was submitting pretty regularly. I had another (paying) job, you know? I was at CBS Television from 1967 to 1970. I was doing Speedball lettering charts for Nielsen Ratings. A bunch of guys were doing that. But I would cartoon at night.

MM:  You were one of the first, along with Jack Ziegler, to be brought into the magazine by Lee Lorenz (who was fairly new to the position of Art Editor, having taken over from his predecessor James Geraghty in 1973). Did it seem to you that you were part of something new at the The New Yorker – that a new kind of cartoon was being welcomed at the magazine? (the word “unconventional” comes to mind).

MM: Did you want to be a single panel cartoonist from the get go?

BW: Yes, I thought so. My parents got the Saturday Evening Post and Colliers and the newspaper. My Uncle Vinny introduced me to Addams and The New Yorker. I was about 10 or 12 years old

MM: I noticed, looking through your New Yorker work, that captionless drawings show up a lot. Your first three drawings were captionless, as are many of your classics (for example: the man reading on a hammock between two trees, the 27th Annual Hunters’ breakfast). Do you believe, as Charles Addams did, that the ideal drawing is captionless?

MM: Having been born in Bangor, Maine, it’s not surprising that hunters, bears, and of course, moose show up from time-to-time in your drawings. Are you drawing from some outdoorsy experiences in Maine, or are these situations just percolating through you because you’re a Mainer?

BW: Anything that will sell, you know? I’m trying to make a buck. But — seriously — the horrors of this world seem to dictate (that is, the news, etc.), and I’d like to lighten it up a bit.”

MM: Can you talk a little about how you became a cartoonist?  Whose work did you admire?

BW: I read all of the comic strips in the paper. So far as illustrators, I liked Remington.

MM: You’re the only cartoonist who’s ever said to me that Remington was an inspiration.

BW: Yeah, when I was a kid –- I was like twelve or thirteen years old, we had a public library there in Bangor, Maine –- and at the top of the stairs there used to be a big portrait of an Indian, and it was by Frederick Remington. I always thought it was pretty impressive. 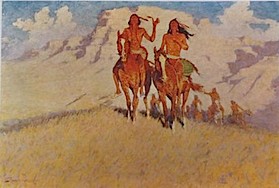 Left: An early Woodman inspiration: Frederic Remington’s  “Sign of Friendship” which hung for 42 years in the Bangor Public Library.

I had an uncle who was in the antique book business, and he had a book on him –- it was dated back in the 1890s. It was all out west, cowboys, calvary, Indians, and all that stuff– pretty good.

MM: I’ve looked at some of Remington’s work and what struck me about it which seems to carry through to your work is the energy in a lot of his drawings and paintings.

BW: Yeah — it’s spontaneous stuff, when you look at it.

MM: A lot people think of your work as spontaneous.

MM: I don’t know if you remember this, but when Saul Steinberg died, the New York Times headline, on the front page was “Saul Steinberg, Epic Doodler, Dies at 84”

MM: Was the New Yorker the object for you when you decided you wanted to be a single panel cartoonist?

BW: I was just trying to survive. I went to art school for a little bit. I was trying illustration.

MM: So the New Yorker wasn’t the goal – it just came along?

BW: Yeah, I mean when I started selling cartoons I realized, obviously, that was the epitome — the top shelf. 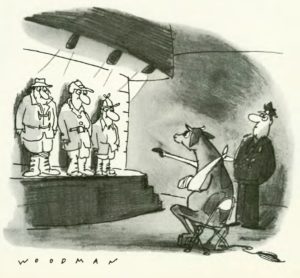 MM: Did you do what a lot of people did back in the 70s, do the rounds, go to Playboy and the others.

BW: I showed up, yeah. I did that quite awhile. Probably not as much as a lot of others. But yeah, I did it diligently for awhile……hey, I enjoyed that piece you did about tracking down [James] Thurber in Mike’s [Mike Lynch] Raconteur.

MM: Oh thanks. Well, Thurber was my god.

BW: Oh yeah, I can understand that. He was a genius, whatever.

MM: When you went in to the New Yorker office back in the mid 1970s, who did you run into? 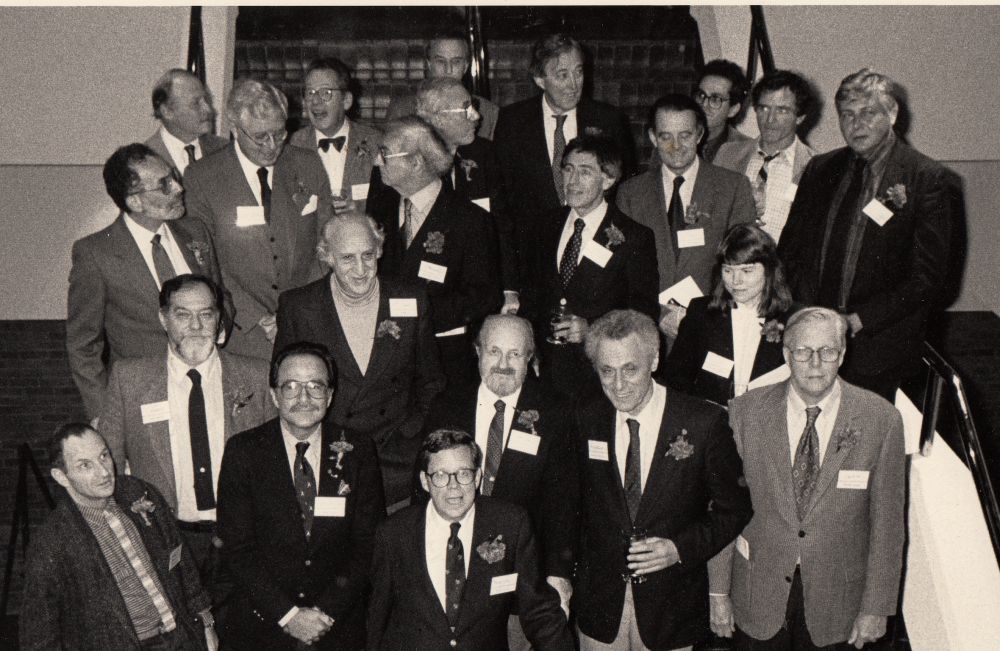 MM: I want to ask you about your sketchbooks. Jack Ziegler has said that “[he] never had a better time looking at anything in [his] life.”

BW: At a point I was doing sketchbooks. [Now] I carry a piece of paper, folded, in my shirt pocket. I write lists. Mostly things I should do. Go to the store. Those kinds of things. Sometimes I write an idea….Now I just doodle all over the place.

MM: There are a lot of people who aspire to doodle as well as you.

MM: Well I wish you would.

BW: I gotta get back to it.

MM: Your website says you’re retired, but we also see on the site that you’re painting up a storm.  I have a hunch you still draw cartoons.  True?
BW: Yes. Sure. Me and my buddies [Lynch and Klossner] are working on some great stuff. Wish you were here! (Laughs.)

Ink Spill will return with more on Bill Woodman in October when he celebrates his 80th birthday.  Again, my thanks to Mike Lynch, John Klossner, and, of course, Bill Woodman.

To see more of  Mr. Woodman’s work, including his  plein air paintings,  please visit his website.