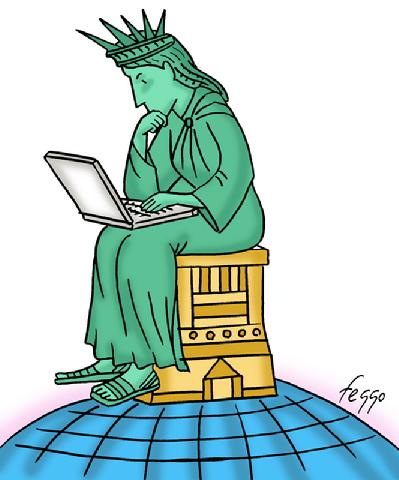 The other day I was engaged in an email exchange with long time New Yorker cartoonist Felipe Galindo (he uses the pen name “Feggo”) about Iain Topliss’s Comic Worlds of Peter Arno, William Steig, Charles Addams and Saul Steinberg; more specifically, we were discussing the section devoted to Steinberg. After Felipe explained what an impact Steinberg’s work had on him, I asked if I could reproduce what he had to say.  So here is Felipe on Steinberg:

I began to like and understand American gag cartoons when I was a young teenager back in my native Cuernavaca, Mexico. Most of what was being drawn in Mexico were political cartoons. I was in middle school then (Escuela Secundaria.) I was able to read Mad and the National Lampoon magazines in my hometown at the only store that sold American publications and Kodak cameras and film to Americans, who used to go to Cuernavaca to learn Spanish. I don’t recall seeing The New Yorker back then. My aunt worked at that store. I could spend time browsing them without being bothered. At the end I’d buy them with my savings. I loved seeing Sam Gross, Gahan Wilson, Charlie Rodrigues and my fellow ex-pat (or semi, since he was born in Spain) Aragonés’ cartoons.

The first time I heard about Steinberg was through a very famous political cartoonist named Rius (pen name of Eduardo del Rio, in Latin America is commonplace to have a nickname or a name that sounds like one), now a good amigo. He used to say that he learned to draw looking at Steinberg’s drawings in small pocket book collections of American cartoons (probably taken from the pages of the New Yorker magazine without their knowledge). For him, Steinberg’s style was very simple. “I didn’t know how to draw but I could draw cartoons like this guy”, I think in the same way you will see a Matisse painting and say “I can paint like this guy, it’s very easy!” In any case, he was influenced by him and, to a similar simple style, he added his political views and changed a whole chapter in Mexican political cartooning history and influenced a whole generation of readers and cartoonists with his controversial comics “Los Supermachos” and later “Los Agachados” drawing the ire of Mexican politicians, presidents included.

I wonder if Steinberg ever knew about this!

A few years later I went to study visual arts at The National University, mostly modern art, and that was another planet. I was more into Tony Smith, Frank Stella and Josef Albers than Diego Rivera or Frida Kahlo who were old school.

After college I tried to reconcile two worlds, humor and art. Two artists that inspired me were Magritte and Feininger. I still was not that familiar with Steinberg then. I recall going to an exhibit of his posters and prints in an American cultural center in early 1980 because a friend suggested it to me. I honestly have to say I didn’t quite get him, it just impressed me his freedom (“why is he using paper from paper bags?”). I was also busy that day with a date that preoccupied my mind with other things. I kept the small brochure (which I still have) and began to study it.

The first time I came to NYC as a tourist in 1981, I got his book The Labyrinth and it blew my mind. I even got a poster of him at the Whitney Museum (which I also still have) and began to study him and finally “get” him. Years later in NYC I found in a flea market All in Line and The Art of Living. I devoured visually those books.

So, that’s the tightrope I aim to walk on, the high bar to jump over, not an easy task, and not successful all the time of course. I fall from it quite often, but keep trying to walk on it over and over.

I browse now and then his books in search of visual philosophy, of challenges, to amuse myself and to find surprises. To inspire me.

I have enjoyed his exhibitions at the Museum of the City of NY and the Morgan Library, plus some exhibitions at Pace Gallery. While it didn’t necessarily lead me to do what he was doing, or to draw like he was drawing, I admire his immense creativity and am inspired looking at his work.

I also like that Steinberg created icons out of clichés and how he explored symbols through humor, something I’m very fond of doing as well.

Perhaps for Americans the cliché imagery (Uncle Sam, Lady Liberty, American Eagle, Santa, etc.) is taken for granted but for an immigrant or émigré like him, or at least to me, those images are always something new and fresh that invites me to play with.

Steinberg can be the subject of long, smart conversations. It is a fun coincidence that he and his work ended up being -like he described of making drawings for The New Yorker- “the best calisthenics one can have.”

From the fun site, Attempted Bloggery, a treat: “Rea Irvin in Costume”.