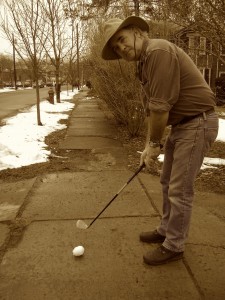 This year Danny Shanahan  celebrates the 25th anniversary of his first contribution to The New Yorker (the issue of September 19, 1988). He’s in that small group of the magazine’s cartoonists who’ve done just about everything that can be done in The New Yorker, cartoon-wise: spreads, single panel cartoons, covers,  and illustrations.

I’ve known Danny since he burst on The New Yorker scene in the Fall of 1988 — we met in the grand ballroom of The Pierre Hotel while attending the magazine’s anniversary party. Not too long after that Danny and his new family moved upstate to the town where my wife, Liza Donnelly and I had settled.

On the occasion of his taking over the magazine’s Daily Cartoon I thought it would be fun to meet up with him electronically for a change and so I sent him a few questions to answer.

So how’s the Daily Cartoon assignment going for you?

It’s been going real well. I didn’t realize how much fun it would be

to write and draw with such immediate topicality. It can be a

challenge, especially at this time of year, but I’m enjoying it.

How has it changed your daily routine (assuming you have a daily routine)? Can you talk a little about what it’s like to work on a daily deadline as opposed to the usual weekly New Yorker deadline.

It’s changed my routine quite a bit, but for the better, I think. I try to work at least one weekend day, so I can send in 5 or 6 drawings by Sunday night or Monday morning; that gives me the luxury of responding quickly to breaking news during the week. The only problem has been, at times, the difficulty of deciding whether or not an idea would be better saved for the weekly batch or sent in quickly for a daily.

Looking at your Daily Cartoon work, the first thing that really stands out is that you’re not using wash  but are working in a  Thurber / Gardner Rea / Nurit Karlin school of ink line.   Any particular reason for the different look?

The real reason for no wash is expediency; I can get more pieces done and submitted much quicker. My roughs are quite finished, anyway, and are often published “as is” in other publications. Of course, the pay per cartoon is far less, which is also a consideration.

The Daily Cartoon, though new to The New Yorker’s site, seems to have a format, i.e. it’s tied in to commenting on current events.  Do you feel as if this is something you need to think about when working on ideas for it, or do you just do whatever you want to do?

I feel that I most definitely have to hone in on specific current events, but that there’s also always broader areas: seasons, weather, holidays, sports, etc. They’re also somewhat specific, but nothing different than what I’ve been doing for years.

How’s the cartooning world treating you otherwise?  Any projects to mention?

Don’t have a lot in the pipeline right now, other than the website. I do keep dreaming of some sort of memoir, now that I’ve been with The New Yorker for 25 years. It’s a nice, round number. I see it as a completely fictitious account of my time at the magazine, full of slander, violence, intrigue, and bad blood. And then Tarantino buys the film rights.

I know you’ve been working on your website. How’s that coming along?

Well. maybe it’s a “grass is always greener” thing, but I wouldn’t mind having another shot at the daily cartoon during a different time of year. Maybe a time of Spring, Baseball, and Taxes, or a time of Beaches, Baseball, and Heatwaves. Of course, there’s always Back-to-School, Baseball, and Halloween. Sometimes it just seems like not much happens in January…