The most recent Sam Gross cartoon in The New Yorker appeared August 5th, 2019.  Mr. Gross’s very first New Yorker cartoon appeared August 23, 1969. Do the math and you’ll find we are in the year, month, and exact day of Mr. Gross’s New Yorker golden anniversary. With today being the date of publication of his debut New Yorker cartoon, I thought I’d check in with Mr. Gross and ask him about that very first sale to the magazine. My call caught him during his morning exercise routine, but he was gracious enough to pause and chat with me for a few minutes.

When I asked him if he recalled the moment when he learned he’d sold to the magazine, he replied, as I knew he would, “Of course I do.” I haven’t met a cartoonist yet who doesn’t remember their first OK (“OK” is New Yorker cartoon lingo for a sold cartoon); in this cartoon world, that moment is a life-changer.  Before telling me of his first OK, he said that he’d actually been selling ideas to The New Yorker for Charles Addams since about 1963. He also sold an idea for Otto Soglow, of Little King fame, but mostly the ideas were for Addams.

And now the story:

It begins with a lunch that included the renowned French artist J.J. Sempe. Mr. Sempe, not yet a New Yorker contributor, had come to town to do a piece on behalf of L’Express.  While in the city, Mr. Sempe was asked to lunch with James Geraghty, then The New Yorker‘s art editor. Mr. Geraghty was interested in having Mr. Sempe submit work to The New Yorker. Originally, Mr. Geraghty’s art assistant, Barbara Nicholls, was to accompany them to lunch as the interpreter, but she had to cancel. In her stead Mr. Geraghty asked the multi-lingual cartoonist Peter Porges to come along. Mr. Porges told Mr. Geraghty he would only go if his friend, Mr. Gross could accompany him.

Shortly, after sipping some wine, Mr. Geraghty leaned over to Mr. Gross (also drinking wine) and said, “Instead of buying the idea [of a recent submission by Mr. Gross] we’re going to buy the whole drawing.” And Mr. Gross replied, “That’s great, thanks.”  Mr. Gross went on to say, “And then, after Geraghty had had another glass of wine, and I had had another glass of wine, he leaned over and said, ‘Oh, and we’re going to buy another one too.'”

Mr. Gross had heard from Mr. Porges that Mr. Geraghty would “drive cartoonists crazy” with editorial changes to cartoons. Back at the New Yorker’s art department following lunch, Mr. Geraghty handed Mr. Gross the rough drawings of the two bought cartoons [most cartoonists submit “rough” drawings.  If bought, the cartoonist will then do a “finish” — the drawing that will be published].  Mr. Gross tells us what happened next:

“So with that particular drawing [the first published cartoon], he gave me the drawing, and I stood there with it, and said, ‘I’m not going, Mr. Geraghty until you specifically tell me what you want in the drawing.’ So he said, ‘put the kid here, dispense with the awning’ and he was very specific on what I had to do.  Afterwards, with all the other drawings I sold, I never had any problem with him. Every time I sold something he told me exactly what he wanted.”

I said to Mr. Gross, “That’s a big deal, selling two your first time.” to which Mr. Gross replied, “I can credit the wine for it.” 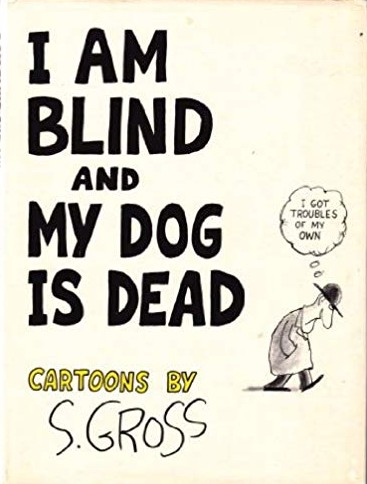 So here’s to one of The New Yorker‘s cartoon giants. It is quite a feat to sell just one drawing to The New Yorker.  To continue on for fifty years (and counting) is another kind of feat. Mr. Gross is one of a select group of cartoonists with a thumbprint style — i.e., no one else has drawn like him, and he draws like no one else (true, as well, of George Booth, also celebrating his New Yorker golden anniversary this year). Feeling in a oh-what-the-hell Grossian spirit, I’ll say too that no other cartoonist even comes close to thinking like him.

For an extended interview with Mr. Gross I highly recommend Richard Gehr’s I Only Read It For The Cartoons, published in 2014, by New Harvest. Mr. Gross is one of a dozen New Yorker cartoonists interviewed.

If you want to listen to Sam Gross being interviewed, there’s this wonderful podcast from Gil Roth’s Virtual Memories Show.

All of Mr. Gross’s cartoon anthologies are must-haves in any cartoon library.  A quartet of them are shown: