It’s going to be awhile before this appears in bookstores (April of 2016) but the wait will be worth it.  Here’s a description  from the publisher (Fantagraphics):

The Realist was a legendary satirical periodical that ran from 1958 to 2001 and published some of the most incendiary cartoons that ever appeared in an American magazine. The Realist Cartoons collects, for the first time, the best, the wittiest, and the most provocative drawings that appeared in its pages, including work by R. Crumb, Art Spiegelman, S. Clay Wilson, Jay Lynch, Trina Robbins, Mort Gerberg, Jay Kinney, Richard Guindon, Nicole Hollander, Skip Williamson, and many others.

Here’s a really nice interview with Jules Feiffer from The Wall Street Journal (by way of Bado’s blog). 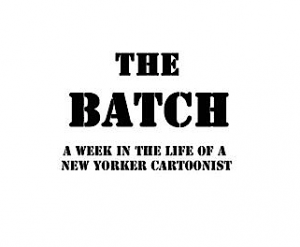 If you happen to be in the vicinity of St. Augustine, Florida on June 30th, you’re in luck, because Mick Stevens,  one of the funniest New Yorker cartoonists on the planet will be showing his work and speaking about “The Batch” [a collective term for the drawings a cartoonist submits weekly to the magazine. Link here to see my complete New Yorker cartoonists glossary]

Mick posted the following on Face Book this morning: