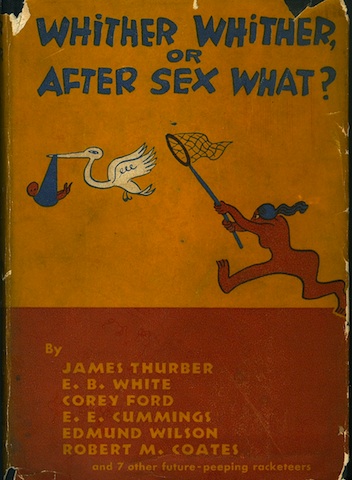 I’ve always loved this book more for its cover than its content.  It was published just five years after the birth of The New Yorker, and a year before Thurber’s first drawing appeared in the magazine (January of 1931). That isn’t to say the book’s publisher wasn’t aware of Thurber’s art. Whither Whither’s cover gently echoes the cover of E.B. White and James Thurber’s Is Sex Necessary? published to great success a year earlier.  Wither Wither’s cover illustration was executed ever-so-slightly in the Thurber vein. The title’s type face is vaguely reminiscent of Is Sex Necessary? as is the use of the word “Sex” and the use of the title in the form of a question.  To drive home the point:  Thurber and White appear on the cover as contributors.

William Gropper, the illustrator, was no Johnny–come-lately to the illustration field.  By 1930 he was a well established cartoonist and illustrator.  If he was taking-off on Thurber’s style – at least for the cover piece —  he couldn’t help but reveal the discipline of his art school roots. Gropper’s work inside the book is less Thurber-like, resembling instead the simpler loose yet determined style William Steig used later in his long career.

While Is Sex Necessary? took off (it’s still in print some 80 plus years after its first printing), The New York Times reviewer whisked Whither Whither away, saying of its essays,  “some are good, some are indifferent, and some are wearying.”