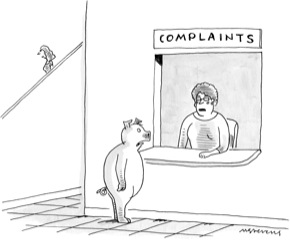 This week a familiar cartoon showed up on the The New Yorker’s last page as part of its continuing Caption Contest. The cartoon, of a pig at a complaint department, was drawn by Mick Stevens,  who has been contributing cartoons to The New Yorker for thirty four years .

Why was the cartoon familiar? Fans of the classic sitcom, Seinfeld, remember the episode “The Cartoon” (it aired January 29,1998) in which Elaine, inspired to submit a cartoon to The New Yorker, stays up all night working on cartoon ideas and finally comes up with the pig at the complaint department. (The New Yorker’s current cartoon editor, Bob Mankoff recently delved into the episode in great detail on his blog). In the episode, as Elaine hands her sketchbook to Jerry, we catch a glimpse of her pig cartoon.

So how did Elaine’s cartoon end up in this week’s New Yorker, some fourteen years after it appeared on television?

For clarity’s sake, Elaine’s cartoon – the one we see on her sketchpad, is not the cartoon in the current New Yorker. In an email conversation I asked Mick how he came to draw Elaine’s cartoon, and he wrote:

Bob [Mankoff] asked me to draw it up for a possible caption contest and/or use in his blog in reference to the Seinfeld episode.

I also asked Mick if he referenced Elaine’s cartoon, as there’s an undeniable similarity between the two.

I didn’t look at the Seinfeld cartoon first but it turned out to be similar.

Curious about the original cartoon that appears on Elaine’s sketchbook, I asked Bruce Eric Kaplan, the New Yorker cartoonist who wrote the Seinfeld episode, if he drew the cartoon we see on Elaine’s sketchpad.  I also asked if he still had the original – I thought it would be fun to post on Ink Spill.  Bruce replied in an email:

I didn’t draw it!

They asked me to but I didn’t want to.

Someone in the art department did it.

I don’t know who has it or if it still exists!

You might wonder why this flurry of detective work on my part about a brand new version of a fourteen year old drawing of a pig. Much like Elaine’s pig, I have a complaint.  A number of news stories that appeared following the publication of Mick’s version of Elaine’s cartoon,  such as appeared on Gawker and Yahoo News suggest that The New Yorker has “republished” Elaine’s cartoon. Hmmm, maybe I should write them a letter…

I really enjoy your sites – I’m a fan! – but Elaine is a fictional character who submitted her drawing to a fictional New Yorker.  The real New Yorker never published Elaine’s cartoon.

Many other sites ( and there are many) tell us that Mick’s cartoon is “the same one” or in at least one case “the very same one” as seen in the Seinfeld episode.

Well, no, actually it isn’t.