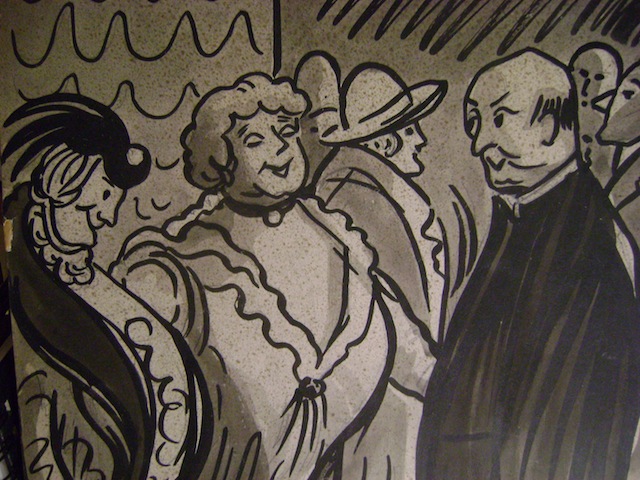 Above: “And now you must meet my bosom friend.”  (rough version of the drawing published in The New Yorker, October 10, 1931)

An Arno on My Desk

Not too long ago I took an original Peter Arno drawing we own, popped it out of its frame, and placed it on my desk.  My thinking was that the drawing, unadorned by glass and metal, might bring me somehow closer to Arno.

His work up close is even more graphically powerful than it appeared in the pages of The New Yorker, and that’s saying something.  No one commanded the magazine’s pages like Arno: not Steinberg, not Gluyas Williams, not Addams.  While Steinberg’s work played and soared and amazed, it never got right up in your face like Arno’s.  Williams’ full pages were delights of subtle construction, and Addams’ draftsmanship ominously hilarious (as the veteran New Yorker cartoonist, Henry Martin, might say, “he drew funny.”) but Arno’s work overpowered, and demanded attention.

Arno drew large in a fairly small space.  The 10” x 15” Bainbridge board holding this particular drawing seems barely big enough to hold his patented swooping brushstrokes.  Like the man himself, the work presents itself all at once, and not, as Frank Sinatra once sang, “in a shy way.”

Obviously not pleased with the rough, Arno went on to do god-knows-how-many-more versions before deciding on the piece eventually published. The major change (improvement?) is that the two central women have become bustier, playing more obviously on the word “bosom’ in the caption. (In The New Yorker’s archives I found this drawing’s caption on a list of “Ideas which Have Been Assigned to Peter Arno.” Unfortunately, the person who wrote the caption is not identified).

Looking very close at the rough version, the pencil lines can be seen cutting beneath the brushstrokes. Arno’s brushstrokes are deceptive; they look as if he brushed with abandon; it was anything but.  Each stroke was plotted in advance. And yet, we know that as he worked, he sometimes sang and tapped his feet to a personal rhythm.  A man who knew exactly what he wanted to do on the page, and who had a hell of a time doing it.

For now, the 81 year old Arno drawing remains on my desk.  There’s definitely a vibe surrounding it –- especially today, on what would’ve been his 108th birthday.