In a fun February 22nd 2020 post on The Daily Cartoonist celebrating the first appearance of James Thurber’s drawings in The New Yorker (shown above), the post’s author D.D. Degg wrote this:

There seems to be some disagreement over whether the above drawings constitute cartoons. A New Yorker State of Mind, where the above screenshot comes from, calls them cartoons; whereas others disagree, calling them spot art. Cartoonist and New Yorker cartoon historian Michael Maslin claims the first real Thurber cartoon appeared in the January 3, 1931 issue (below).

To use language we’ve been hearing a lot of in Democratic debates: my name was invoked, so I would like to respond.

There really shouldn’t be “some disagreement over whether the above drawings constitute cartoons.”  Using the New Yorker‘s language for referring to cartoons, in usage for 95 years, there are two ways one can go when referring to the magazine’s cartoons: you can call them cartoons, or you can call them drawings (and well yes, there’s a third descriptive:  some call them “art”). The magazine “officially” refers to them as drawings (you can see the designation on every Table Of Contents). There are three kinds of New Yorker cartoon formats: with a title (and that could mean a series of cartoons linked by a theme — all appearing in a spread. Booth, Ziegler, Levin, and Saxon, to name a few, were responsible for some terrific spreads over the years); with a caption; without a caption. I’ll show you three of mine as examples: 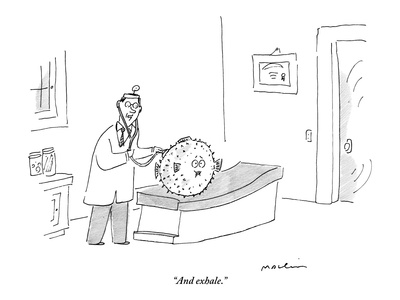 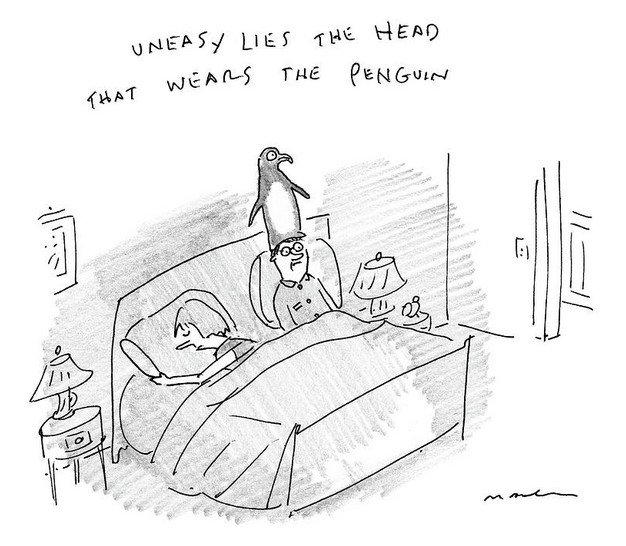 All of the above are cartoons, and they are also drawings. They all appeared in the magazine, surrounded in some part by text, but not linked to the text in any way other than graphic proximity. In Thurber’s Pet Department piece at the top of this post, the drawings are accompanying the text — the piece as a whole set off by a horizontal and vertical line. The seal, and the dog exist in Thurber’s piece to illustrate the text surrounding them. New Yorker cartoons, historically, do not reflect, or refer to, or illustrate the text surrounding them.  In Thurber’s Pet Department drawings there is no “one-two punch” with either drawing (according to Peter Arno, that one-two punch is an essential element of a New Yorker cartoon). The wonderful Thurber dog and seal, if removed from the accompanying text, and left on their own, would still be fun drawings (hey, they’re Thurber drawings after all). They might make us laugh; we may find it amusing that a seal is in a room with a table and lamp (I know I do). But if the drawings had been submitted as cartoons, sans accompanying text, I doubt the editors would’ve bought and run them as a stand alone drawing/cartoons (Spots maybe). There’s not enough cartoon there.

Another sliver from Mr. Degg’s post, referring specifically to Thurber’s dog and seal:

“…whereas others disagree, calling them spot art.”

My information concerning Thurber’s first New Yorker cartoon comes from Edwin T. Bowden’s James Thurber: A Bibliography, published by Ohio State University Press in 1968. In all the years (close to 40 now) I’ve used this as a reference, I’ve yet to find an error.  While I heavily rely on Mr. Bowden’s good work, I also comb through back issues of The New Yorker.  In all of my combing, I’ve never found an earlier Thurber New Yorker cartoon than the one Mr. Bowden designated as the first ( that cartoon appeared in the issue of January 31, 1931).

Brendan Loper on getting directions.

Mr. Loper has been contributing to The New Yorker since 2016.

Mr. Steinberg has been contributing to The New Yorker since 2012.