Above: The New Yorker War Cartoons  1945 Special Edition For The Armed Forces.  For more on The New Yorker‘s special war editions go here.

The  above War Cartoons cover by Alan Dunn originally appeared on The New Yorker issue of August 11, 1945. Nearly a year later Mr. Dunn revisited the Honor Roll with this cover of July 27, 1946: 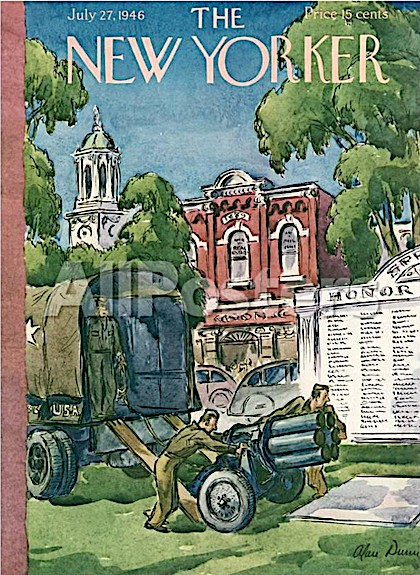 And on into June with another cover (we are told) reflecting this strange time. You might not know this cover was presented to us as timely without knowing the title (“Lockdown Sampler”). Without the title, in a different time, we would likely see this cover, as William Steig once defined (pre-Tina Brown) New Yorker covers, as a “special moment — fleetingly observed.”

Read a short Q&A with Roz Chast here about her cover.

Two duo efforts in this issue, with one duo, Sophie Lucido Johnson (and, I’m taking a guess here on this link:) Sammi Skolmoski new to the cartoonist stable. The Spill custom is to count a duo as one new entry on the A-Z, which means the Johnson/Skolmoski duo are the 9th newbies so far this year, and the 62nd newbies brought in under Emma Allen’s cartoon editorship (begun in May of 2017).

The Cartoons: a number jump out for me — five to be exact. Curiously (or not) they appear in a row, beginning with Emily Flake’s clowns about to pie throw (perhaps my favorite Flake drawing ever), followed by Lars Kenseth’s airport baggage moment, then Danny Shanahan’s fab accessorized dinosaurs, Joe Dator’s E.T. bicycle rental scenario, and finally Farley Katz’s “Sunset Boulevard-ish” Instagram drawing.

See the slideshow of this week’s drawings here (if you scroll down a bit).