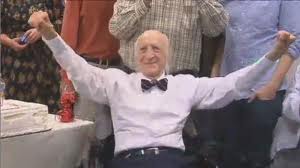 The New York Times has reported that New Yorker cartoonist Al Ross has died.    Al, who was 100, easily held the title of most senior member of this cadre. He contributed over six hundred drawings to the magazine, from November 27, 1937 through February 18, 2002.

There were a number of veteran cartoonists who warmly welcomed me when I first began at The New Yorker.  Al Ross was one of them.  For a kid (I was 24) who suddenly found himself socializing with the magazine’s legendary cartoonists, Al’s upbeat vibe and amused expression was the perfect tonic for freshman insecurity. Al didn’t wear his seniority on his sleeve –- his warmth was inclusive, uncomplicated, and genuine.

If it wasn’t enough that Al was a great guy, he was also a superb cartoonist with a style to die for.  His fluid line, and the humor it incorporated seemed effortless.  Many cartoonists resemble their work and Al was no exception; he carried himself as his characters carried themselves on paper; he, and they, seemed always in motion (heck, even his signature seemed in a hurry).

The first time I met him, at a party following a gallery exhibit of New Yorker cartoons, I was leaving, heading into an elevator and he was coming out, about to throw himself into the throng. He paused to shake hands, and delivered what I’d see again and again whenever we ran into each other: a welcoming smile.