As visitors to Ink Spill know, there are plenty of photographs of New Yorker cartoonists appearing on the A-Z, but until today there was no photo of Al Kaufman.  Mr. Kaufman was somewhat of a mystery to me until, back in 2011, I did some some detective work.

Just two days ago a niece of Mr. Kaufman, Debra Ziss, an artist & illustrator in her own right, sent in these two wonderful photos of Mr. Kaufman. My thanks to Ms. Ziss for helping round out Ink Spill’s portrait of her uncle. 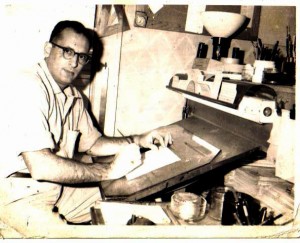 Al Kaufman  ( self portrait, above. According to his son, that’s Mr. Kaufman’s family popping up out of his head. Photo courtesy of Mr. Kaufman’s niece, Debra Ziss ).  Born Alfred Kaufman, New York City, 1918. Died, age 59, May 1, 1977, Long Branch, New Jersey.  Kaufman studied at the City College of New York before moving to the Jersey shore in 1954. During WWII, he served in the Navy, stationed in the Philippines.   He became a full-time professional cartoonist in 1946 ( while working as the manager of a grocery store, he practiced cartooning in his off-hours).   A member of The National Cartoonists Guild and The International Cartoonists Society, he contributed to such magazines as The Saturday Evening Post, Collier’s, The Ladies Home Journal, This Week, King Features Syndicate, The New York Times, The Christian Science Monitor, Esquire, Look, and American Legion Magazine [ this information culled from two NJ newspapers:  The Daily Register, and The Red Bank Register as well as an article “They Make You Laugh: Al Kaufman,” The Saturday Evening Post, July 29, 1961] New Yorker work:  ten drawings, December 13, 1947 through July 10, 1978