Steinberg did ad work?  You bet.  As with William Steig, a Steinberg Part 2 will be posted at some later time.

Warren Bernard,  Executive Director of SPX, is the one responsible for researching & gathering all these images. My thanks to Warren for allowing them to appear here.

Saul Steinberg  (above) Born, June 15, 1914, Ramnic-Sarat, Rumania. Died in 1999. New Yorker work: 1941 – (The New Yorker publishes his work posthumously). Steinberg is one of the giants of The New Yorker.  Go here to visit the saulsteinbergfoundation where you’ll find  much essential information and examples of his work. 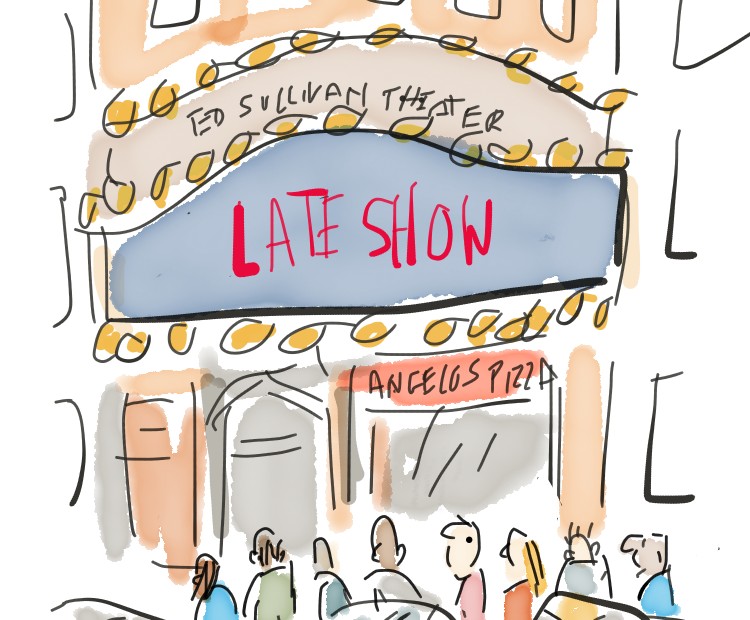 CBS News Resident Cartoonist, Liza Donnelly, visited the Ed Sullivan Theater  (yeah yeah yeah!) the other day to draw The Late Show with Stephen Colbert. Here’s an article on The Huffington Post about her visit.  And go here to see more of her Late Show drawings and read what she had to say about the experience.

In the past few days we’ve seen this one by Donald Higgins, and in AB’s latest post, one by Larry Whittington. See and read all about them here.

If you have twelve minutes to spare, here’s a fun video of  New York City in the 1920s from Hey New York State. The screen grab shows Peter Arno tussling Alexander Woollcott’s hair (you can see that that happens at the 11:34 mark — it’s very brief). Other highlights: George Gershwin rehearsing, Chaplin playing piano, Fanny Brice singing (the video is mostly silent, but Ms. Brice is heard), some waterfront footage and Manhattan street scenes galore…check it out here.