From Attempted Bloggery, this Thurber “lawn scarf”  — Read about it here!

Thurber’s entry on the Spill‘s A-Z:

James Thurber (pictured above) Born, Columbus, Ohio, December 8, 1894. Died 1961, New York City. New Yorker work: 1927 -1961, with several pieces run posthumously.  According to the New Yorker’s legendary editor, William Shawn, “In the early days, a small company of writers, artists, and editors — E.B. White, James Thurber, Peter Arno, and Katharine White among them — did more to make the magazine what it is than can be measured.”

Key cartoon collection: The Seal in the Bedroom and Other Predicaments (Harper & Bros., 1932). Key anthology (writings & drawings): The Thurber Carnival (Harper & Row, 1945). There have been a number of Thurber biographies. Burton Bernstein’s Thurber (Dodd, Mead, 1975) and Harrison Kinney’s James Thurber: His Life and Times (Henry Holt & Co., 1995)  are essential. A short bio appears on the Thurber House website: http://www.thurberhouse.org/about-james-thurber/ 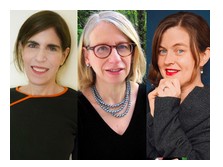 Continuing their book tour for Why Don’t You Write My Eulogy Now So I Can Correct It?  New Yorker contributors Patricia Marx and Roz Chast will be at Books Are Magic on April 2nd. They’ll be joined by New Yorker cartoonist, Emily Flake (my thanks to Stephen Nadler of Attempted Bloggery for alerting me to this event).