The below fraction of a lengthy interview, “Motoring With Bob Mankoff” on Peter McGraw’s May 2019 blog, caught my attention (to see the entire interview, go here):

Bob Mankoff: “…I would get up and I would go to the drawing board. I used to spend hours and hours reading the papers, thinking, getting ideas and looking at ideas that I had done before. Taking a nap, drinking coffee, getting up and drinking coffee. I would have two days.

PM: Do you mean two days in a day?

BM: Two days in a day you would get ideas. There would be a period early in the morning where you would get ideas and work through them. My life at that time, my mind was always on for ideas constantly in the world. It was in a way an unpleasant and narrow experience. You have to work and enormously hard to get the ten or twenty ideas every week. The structure was that my conscious and unconscious mind was always in the back processing material. I’m sure standups are doing that also. I’m delighted I’m no longer doing that.

PM: Were you single at the time?

BM: I was single, married, single and married. I’ve been married three times. I’m sure this is true for stand-ups and other people where there’s so much of your mind is eaten up by this natural talent or propensity that you have that gets blown out of all proportion.

PM: You don’t seem terribly wistful about doing this.

BM: No, I’m not. First of all, I did what I think is good work. It’s a young person’s game. The idea that creative comic art goes on forever. It doesn’t. I always had other interests from the start. I was never singly looking at that. Fairly early, I got into The New Yorker in ’77. By 1984, I had burned out…”

I bolded the stand-out section,“It’s a young person’s game. The idea that creative comic art goes on forever. It doesn’t.”   Hmmmn, really?  We’re reminded every so often that nothing lasts forever; I’ve found, however, that cartoonists are most often young at heart — their comic creativity tends to last as long as they do, no matter their age (and I have to stick with New Yorker cartoonists here as I have zero knowledge of cartoonists in other fields). But you be the judge. Here’s a piece,”Looking On The Bright Side” — ever so slightly condensed — I wrote for The New Yorker‘s website in 2008. 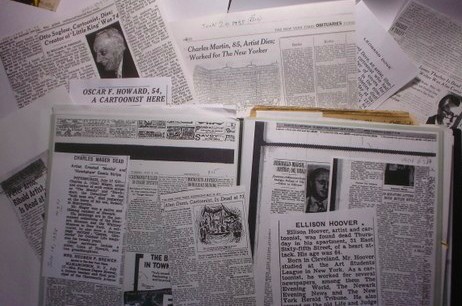 Unlike baseball players or football players, who usually retire before their fortieth birthday, cartoonists tend to remain on the field for a very long time. For a while now, I’ve kept a black binder labeled “New Yorker Cartoonist Obits.” Look—I know that may seem a little dark, and maybe it is, but I had a childhood interest in reading obituaries, and when I grew up it seemed as natural as death itself that I begin collecting obituaries of New Yorker cartoonists.

What’s striking is the lengthy lives that many cartoonists have led, and how many of them were still working well into their eighth and ninth decades.

The average age of the last dozen New Yorker cartoonists who have spilled their final bottle of ink was 86.* I brighten when I think of the average age as 86, although I have plans to go on much longer than that—bypassing Mischa Richter at 90, Syd Hoff at 91, George Price at 93, and William Steig at 95.

Simple math tells me — if I’ve done it right—that when I reach the age of 86, it will be the year 2040; I’ll be working on my weekly batch of drawings, and looking forward to at least another decade of work. If I’m lucky.

*Curious if the average had changed, I’ve gone back this morning and looked at the ages of the more recent last dozen New Yorker cartoonists who passed away. The average age: 82.  The average lowered from 86 by the deaths of three colleagues who left us way too soon: Leo Cullum (age 68), Michael Crawford (70), and Jack Ziegler (74), all still very much in their prime and contributing to the magazine at the time of their passing.  Had we not lost those three artists, the average would’ve remained at 86.

Politics and privilege, from Peter Kuper, whose website can be found here.